Grant Afseth (OKC Thunder Wire) looks at 6 adjustments the Thunder will need to make if Russell Westbrook misses any time in the regular season: “It’s important to note that many backup point guards are not used to shouldering a high usage rate but that isn’t the case with Schröder. He had a 30.5 percent usage rate last season and has had a usage rate above 27 percent for four consecutive seasons.”

A sneak peak at the Jordan Why Not Zer0.1 University Reds (via Sneaker News). END_OF_DOCUMENT_TOKEN_TO_BE_REPLACED

And not to be undone, Russell opened up the gym to some of his Thunder teammates for an unofficial pre-training camp practice. If this doesn’t get you hyped for the season, then I can’t help you. 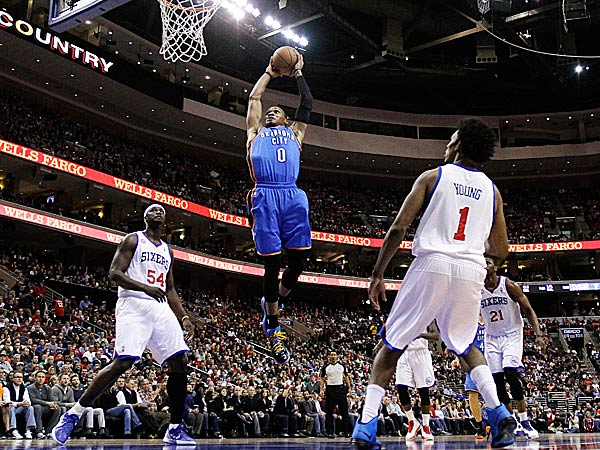 Regardless of what you think of Nike’s “KD is not nice” campaign, imagine the fear in the Philadelphia 76ers’ locker room when A) they have to face the Thunder after a loss and B) they have to face Kevin Durant after the first ejection of his career. The Thunder come into the game having lost to the Brooklyn Nets in one of the more frustrating games of the season. After being down by 20+ in the first half, the Thunder battled back to tie the game in the 4th, only to completely squander the game through bad defense and questionable officiating.

The Thunder come into the game 24-7, tied for 1st in the Western Conference. They lead the season series 1-0, after beating the Sixers in Philadelphia in overtime 116-109.  Durant scored 37 and Russell Westbrook had 30 points in a game that the Thunder could never put the Sixers away. Every time the Thunder got a sizeable lead, Philly went on a run. The difference came in overtime in the form of four consecutive 3-pointers from 4 different Thunder players.

The Sixers come into the game with a 15-18 record, clinging on to the 8th spot in the East over Boston by percentage points. The Sixers are 3-9 in their last 12 games and have been plagued by lack of consistency on the offensive end, as evidenced by their 93.3 points per game average (good for 26th in the league). They are led by 4th year point guard Jrue Holiday who is blossoming this season, averaging 18.8 points, 9 assists, and 4.2 rebounds per game. He is joined in the backcourt by veteran Jason Richardson and 3rd year wingman Evan Turner, who is also starting to come into his own after struggling his first two seasons in the league. The front court is undersized, manned by versatile PF Thaddeus Young and Lavoy Allen. Their bench can be explosive led by Nick Young and Dorell Wright and center Spencer Hawes. Each of the bench players is capable of catching fire from 3-point land and putting up big numbers.

1) Russell Westbrook vs. another UCLA point guard – Russell Westbrook has had a go of it lately versus his fellow Bruins point guards. He got torched by Darren Collison of the Dallas Mavericks for 32 points and 4 assists a week ago. Utah Jazz reserve guard Earl Watson had one of his higher assist games against the Thunder with 8 assists. The good news is that Westbrook held Holiday to 6 points on 3-11 shooting the last time they played.

2) Serge Ibaka vs. Thaddeus Young – Young is one of those versatile, undersized power forwards that give Ibaka fits. He does most of his work in the midrange area, thus negating Ibaka’s biggest strength as a defender. This was on full display the last time the Sixers played the Thunder, as Young had 29 points and 15 rebounds. All the while, Ibaka had 0 blocks and 9 boards.

In remembering these past 2 weeks, and watching the first 6 minutes of the first quarter in the Phoenix game, I’m reminded that, even though the Oklahoma City Thunder are athletically superior to most teams, their defense will be the tell-tale sign whether they reach glorious heights this postseason. A lot of the defensive breakdowns they had last season, are back again this season. The cast of characters is the same, so the fact that improvements have not been made, is really worrisome for their future postseason success.

Two seasons ago, when the Thunder had Ron Adams as an assistant coach, they were near the top of the league in defensive efficiency and used that to propel them to the postseason for the first team since moving to Oklahoma City. Since Adam’s departure after that postseason, there has been a lack of defensive focus that is being masked and hidden by the team’s improved offensive efficiency. When the team struggles offensively, this lack of defensive focus can have adverse effects on the Thunder’s ability to win, especially in the playoffs.

The thing about defensive breakdowns is that they are usually a combination of several defensive breakdowns in one series. It’s not just one play in a possession that causes this. It’s usually a chain reaction of defensive lapses. The first thing the Thunder struggle with is their pick-n-roll defense. The Thunder guards, Russell Westbrook, in particular, have a tendency to go over the pick, instead of fighting through it to stay in front of their man. The problem with this is if the big man doesn’t hedge over a bit, the opposing guard just blows right by them and past their primary defender.

It’s a play like this where you have to know your opponent’s tendencies. If the scenario is guarding a slower guard (i.e. Jason Kidd or Mike Conley), then the Thunder guard can go over the screen as there is no threat of a blow-by. The only threat is if the guard is a competent 3-point shooter. The big man in this situation has to know who he is guarding and decide whether to hedge or stay with his man. In this case, if we are talking about Dirk Nowitzki or Zach Randolph, then it would probably be best for the defending big man to stay on his man.

If the situation is changed to a speedier guard, such as Ty Lawson or Tony Parker, then the big will have to hedge to allow the defending guard a chance to stay in front of his man. The worst thing that can happen in this situation is a switch, where the big is guarding a speedy guard, and the defending guard is on the offensive big. This opens up a ton of options for the offense and puts a lot of pressure on the defense.

The primary goal of the pick-n-roll is to allow movement towards the rim. But, against the Thunder, this is also achieved through dribble penetration. When he was drafted out of UCLA, Russell Westbrook was advertised as a defensive guard, having just won Pac-10 defensive player of the year. But what worked in college (gambling on steals, using other-worldly athleticism to pressure opponents) hasn’t worked quite as well in the NBA where the world’s best basketball players play. A lot of what makes defense work is where you are positioned. If you are not in the correct defensive position, an NBA player will blow by you in a heartbeat.

Where Thabo Sefolosha is more of a technical defender, using his length to make the opposition adjust their play, Westbrook is more an instinctual defender, always trying to go after the steal. But don’t mistake steals for good defense. When you constantly gamble for steals, you put pressure on the rest of the defense to play 4 on 5 defensively. Eventually, the open man will be located, and its usually on the 3-point line or for an easy bucket.

This, then leads to the next defensive issue for the Thunder, which is closing out shooters. After the acquisition of Kendrick Perkins and the insertion of Serge Ibaka into the starting lineup last season, the Thunder went from squishy soft interior presence to hardcore interior presence. One would surmise, with that kind of support in the interior (to also include Nick Collison and Nazr Mohammed), the Thunder wings would trust their bigs more and not sink in every time the ball gets into the paint. Instead, it’s become commonplace for the entire defense to sag into the paint when a breach occurs which leads to wide open three point shots. Teams like San Antonio and Dallas feast on this and always give the Thunder problems.

Once the defense has been breached and the ball is in the paint, then the advantage goes to the offense. When big men have to move around, it takes them out of their comfort zone. Our big men like to battle until the shot goes up and then box out for a rebound. But if ball is penetrated into the paint, then the bigs have to move around to defend the paint. Even with Ibaka leading the league in blocked shots, this still puts the defense at a disadvantage. If Ibaka leaves his man and whiffs on a blocked shot attempt, then his man is in position for the offensive rebound and put back. Much like steals, blocked shot don’t automatically equate to good defense. But if you are going to have Ibaka play free safety in the paint, then KD needs to slide down on defense and help out on the boards. While it may seem like this has been happening, as evidenced by Durant averaging a career high 7.9 rebounds per game, it also needs to be taken into account that the Thunder have played a lot more small ball with Durant at the 4 this season.

The most important issue with the Thunder’s lack of defensive intensity is their will. A lot of their deficiencies can be overcome by focusing more on the defensive end and working smarter. Ron Adams may have been a great defensive strategist. But even more important was that he held the players accountable for their actions on the defensive end. Once he left, there was a general sense of apathy concerning smart defensive basketball. The Thunder were content with just being good enough defensively and letting their athleticism dictate their defensive schemes. This is especially evident in the 4th quarter of close games. When the Thunder are focused, they can play great defensively and use that close out games.

It’s not all bad though. Due to their athleticism, length, and youth, the Thunder are one of the better teams at defending the fast break. They are constantly stifling transition opportunities for the opposition and cause a good number of turnovers defending the fast break. As we saw in the 4 game stretch from March 25th thru April 1st, where the Thunder played the Heat, Trailblazers, Lakers, and Bulls, the Thunder can put together a string of great defensive games. The question becomes, will that translate to the playoffs?