Regardless of what you think of Nike’s “KD is not nice” campaign, imagine the fear in the Philadelphia 76ers’ locker room when A) they have to face the Thunder after a loss and B) they have to face Kevin Durant after the first ejection of his career. The Thunder come into the game having lost to the Brooklyn Nets in one of the more frustrating games of the season. After being down by 20+ in the first half, the Thunder battled back to tie the game in the 4th, only to completely squander the game through bad defense and questionable officiating.

The Thunder come into the game 24-7, tied for 1st in the Western Conference. They lead the season series 1-0, after beating the Sixers in Philadelphia in overtime 116-109.  Durant scored 37 and Russell Westbrook had 30 points in a game that the Thunder could never put the Sixers away. Every time the Thunder got a sizeable lead, Philly went on a run. The difference came in overtime in the form of four consecutive 3-pointers from 4 different Thunder players.

The Sixers come into the game with a 15-18 record, clinging on to the 8th spot in the East over Boston by percentage points. The Sixers are 3-9 in their last 12 games and have been plagued by lack of consistency on the offensive end, as evidenced by their 93.3 points per game average (good for 26th in the league). They are led by 4th year point guard Jrue Holiday who is blossoming this season, averaging 18.8 points, 9 assists, and 4.2 rebounds per game. He is joined in the backcourt by veteran Jason Richardson and 3rd year wingman Evan Turner, who is also starting to come into his own after struggling his first two seasons in the league. The front court is undersized, manned by versatile PF Thaddeus Young and Lavoy Allen. Their bench can be explosive led by Nick Young and Dorell Wright and center Spencer Hawes. Each of the bench players is capable of catching fire from 3-point land and putting up big numbers. 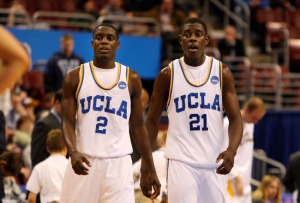 1) Russell Westbrook vs. another UCLA point guard – Russell Westbrook has had a go of it lately versus his fellow Bruins point guards. He got torched by Darren Collison of the Dallas Mavericks for 32 points and 4 assists a week ago. Utah Jazz reserve guard Earl Watson had one of his higher assist games against the Thunder with 8 assists. The good news is that Westbrook held Holiday to 6 points on 3-11 shooting the last time they played.

2) Serge Ibaka vs. Thaddeus Young – Young is one of those versatile, undersized power forwards that give Ibaka fits. He does most of his work in the midrange area, thus negating Ibaka’s biggest strength as a defender. This was on full display the last time the Sixers played the Thunder, as Young had 29 points and 15 rebounds. All the while, Ibaka had 0 blocks and 9 boards.