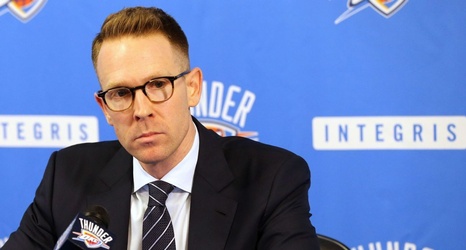 Armed with a $10.8 million dollar trade exception, several player assets, two empty roster spots, and a competitive team, it appeared like the perfect storm for Oklahoma City Thunder general manager Sam Presti to make a move to improve the team. But as the dust settled on the league’s transactions at the 3 p.m. trade deadline, the Thunder were no where to be found on the league’s trade approval docket. Having made a small trade several days earlier when they moved guard Timothe Luwawu-Cabarrot to Chicago for a heavily protected 2nd round pick, the Thunder seemed poise to make a move.

Rumors were abound that the Thunder were interested in several wings around the league, such as Orlando’s Terrance Ross or Atlanta’s Taurean Prince. In the end though, the Thunder team that went into Thursday morning was the same team that took the floor against the Memphis Grizzlies, Thursday evening. Here are three reasons why the Thunder likely stood pat during this trade deadline. END_OF_DOCUMENT_TOKEN_TO_BE_REPLACED

Brady Trantham (The Franchise OK) on news and notes from the second day of training camp: “When you do offensive rebound, and we’ve been a good offensive rebounding team, if Steven or whoever it is doesn’t score immediately on a putback and the ball comes back out, it’s going to be very difficult to reset the offense. We’ve got to be able to continue attacking right away, and randomly probably.”

Nick Gallo (OKCThunder.com) says length will define the Thunder’s defense: “For now, the Thunder isn’t getting to do a ton of five-on-five work, although they did get some live work in at the end of both practices. With both Russell Westbrook and Andre Roberson sidelined, the Thunder coaching staff is keeping the two backcourt stalwarts heavily involved in the mental portions of practice that will be going on all week long.” END_OF_DOCUMENT_TOKEN_TO_BE_REPLACED

Yes, this is, in fact, the chorus to “Fight Song” by Rachel Platten. But to Oklahoma City Thunder fans and to Paul George, this might as well be the anthem for the upcoming season.

We’re familiar with the song and dance. Oklahoma City traded Victor Oladipo and Domantas Sabonis for Paul George. We started seeing mental images of Westbrook and George hoisting the Larry O’Brien above their heads in celebration. We also saw the underwhelming season that transpired in 2017-2018. One that ultimately was put to an end as the Utah Jazz defeated the Thunder in 6 games in the first round of the playoffs. END_OF_DOCUMENT_TOKEN_TO_BE_REPLACED

Erik Horne (NewsOK) on who will decide who will start at power forward: “We have to let Billy make those decisions,” Presti said. “He’s in charge of what happens once the ball is tipped up and once we are competing. He makes all the decisions relative to what happens between the lines.”

Horne (NewsOK) on Presti talking about injury updates: “Presti added that he feels good that the Thunder will have both Westbrook and Roberson back at some point “relatively early in the year.” Westbrook underwent arthroscopic surgery on his right knee last week and is expected to be reevaluated in three weeks, one week before the Thunder tips off against Golden State in the regular-season opener Oct. 16.” END_OF_DOCUMENT_TOKEN_TO_BE_REPLACED

Erik Horne (NewsOK) with a preview of what could be the Thunder’s new City edition jerseys: “On Monday, Red Earth – a non-profit which promotes the traditions of American Indian arts and cultures – posted photos of the new uniforms on its Twitter page. Those photos are accurate, The Oklahoman learned.”

Horne (NewsOK) on Team USA selecting Bryce Alford of the Oklahoma City Blue to play on the USA World Cup Qualifying Team: “The FIBA World Cup Qualifying games are used to qualify nations that will compete in the 2019 FIBA World Cup in China, as well as seven nations to the 2020 Olympic Games in Tokyo. Coached by former NBA head coach Jeff Van Gundy, the team will begin the second round of qualifying on Sept. 14 against Uruguay in Las Vegas, then play Panama on Sept. 17 in Panama City.” END_OF_DOCUMENT_TOKEN_TO_BE_REPLACED

Nick Gallo (OKCThunder.com) talks about Dennis Schroder’s journey to the NBA: “Dennis always heard that when people pass away, family and friends around them sometimes do things they regret. He aimed to not fall down that path. As a result, he dove headfirst into basketball, relying on his coach Calin to help him develop a mindset and tenacity to help him not just overcome his slight frame, but to amplify his talents when he shot up to 6-foot-1.”

Patrick Patterson discusses using Mueller Sports Medicine products in this paid ad on Sports Illustrated: “These experiences with injury helped him push through recovery from knee surgery a year ago, just as he was set to begin the regular season with a new team. “I was nervous at first because I’ve never had any kind of knee issues before,” Patterson discloses. “But thankfully, with the great team I have around me, we were able to find the best solution and address the issue. Now I feel great.” END_OF_DOCUMENT_TOKEN_TO_BE_REPLACED

Make sure you check out the new episode of the NTTB Podcast where we look at the possible return of Kevin Durant to Oklahoma City and the team’s two superstars in Las Vegas for the Team USA minicamp.

Erik Horne (NewsOK) looks at Kenny McFadden, the man that make Steven Adams (and New Zealand basketball) what he is today: “The NBA has shifted to a small man’s league, but Adams has thrived because of McFadden, the man who went to New Zealand 35 years ago, dedicated his life to training youth basketball players, and eventually set the foundation for Adams to become one of the league’s most versatile centers.” END_OF_DOCUMENT_TOKEN_TO_BE_REPLACED

Nick Gallo (OKCThunder.com) on Nerlens Noel’s upcoming season of redemption: “This is something I’ve been really wanting my whole life, just to be on a talented team that can really complement my skill set and really show what I’m really about and go out on the court and play my game with no hesitation. Coach Billy has given me the utmost confidence since I’ve been talking to him day by day. Just go out there and play your game. There’s nothing in it besides basketball and just being yourself. I felt really accepted.”

Gallo (OKCThunder.com) on Hamidou Diallo’s potential in Las Vegas: “Offensively, Diallo broke through with an impressive performance that included 19 points on 7-of-11 shooting and 8 rebounds. He made a pair of made three-pointers with solid shooting form, hit a long two-point jumper and likely the play of the game, a vicious baseline drive that culminated in a two-handed flush. Diallo isn’t heralded as a scorer coming out of college, but as a 19-year old he obviously still has plenty of room to grow.” END_OF_DOCUMENT_TOKEN_TO_BE_REPLACED

On the 10-year anniversary of Clay Bennett announcing OKC officially had a team, here are 10 defining moments from the Thunder’s website.

Royce Young (ESPN) on the Thunder signing maligned big man Nerlens Noel: “Noel dealt with a thumb injury that caused him to miss a lot of time last season, and was suspended five games in early April for violating the league’s anti-drug program.”

Ron Matthews (OKCThunder.com) looks at the 10-year anniversary: “Thanks to superstar players like Russell Westbrook and a fan base that is impossible to miss, the letters OKC are as universally known throughout the world as PHX, MIA, ATL and other metropolitan cities. Thunder jerseys and merchandise are commonly spotted at airports and other high-traffic venues throughout the country.” END_OF_DOCUMENT_TOKEN_TO_BE_REPLACED

Royce Young (ESPN) on how the gamble the Thunder took on Paul George a year ago paid off: “But at a private party on Saturday hosted by Russell Westbrook at a mansion near Lake Arcadia, music from echoing off the tall Oklahoma oak trees, George walked onstage, fresh off a private jet, and grabbed the microphone.”

Brett Dawson (NewsOK) on the Thunder’s interest for a big man this offseason: “Though Paul George and Jerami Grant are committed to Oklahoma City, the Thunder still has moves left to make. Reports indicate Oklahoma City at least is taking a look at backup centers on the free-agent market.” END_OF_DOCUMENT_TOKEN_TO_BE_REPLACED