The Set-Up: For many teams, the game after the trade deadline is a battle of attrition. The players that were traded away, of course, will not be available for their old team. And, unfortunately, because of travel and needing to get physicals, won’t be available for their new teams either. With injuries and transacted players, some teams are left with rosters the size of playoff rotations. END_OF_DOCUMENT_TOKEN_TO_BE_REPLACED 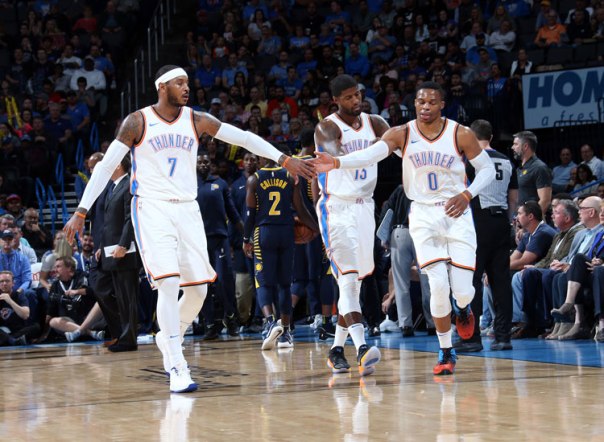 Many went into Thursday’s NBA trade deadline thinking the Oklahoma City Thunder would definitely be buyers in the trade market. When their defensive ace, Andre Roberson, went down with a season-ending patellar tear, many around the league thought Thunder GM Sam Presti would try to find a replacement via trade. While the Thunder didn’t necessarily have a large cache of assets, there was a sense this season would not be business as usual when it came to player transactions.

But, alas, the Thunder decided to stand pat and hold on to the assets they do have and the players currently on the roster. The thing about the trade deadline is that you usually don’t hear about the trades that didn’t get consummated. I’m more than sure that Presti did his due diligence around the league, but either the prices were too high or the cupboards weren’t as stocked as he thought they would be. END_OF_DOCUMENT_TOKEN_TO_BE_REPLACED

Sam Amick (USA Today) on Paul George’s upcoming free agency decision: “He’s well aware how his choice will affect the lives of others, from his actual family to this Thunder group that wants so badly for him to return alongside Russell Westbrook. So he picks his words wisely, even goes over old interviews to make sure he’s saying what he means and meaning what he says. Yet as the 3 pm EST trade deadline nears on Thursday, and with the Thunder (31-24) set to face the very Lakers team that is widely seen as the No. 1 threat for his services, there’s one thing that is helping him be more at ease: he’s not going anywhere just yet – if ever.”

Russell Westbrook and Paul George are here to take your basketball.