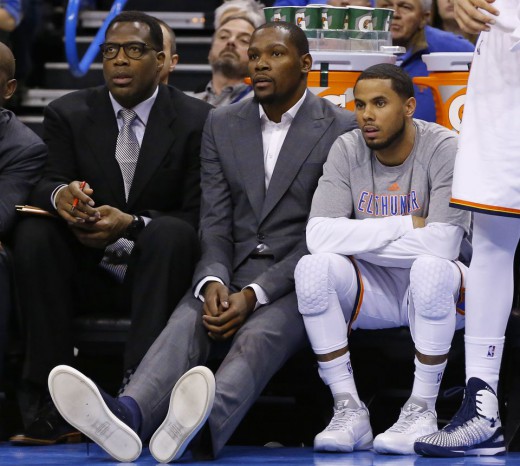 The Oklahoma City Thunder sent out a press release updating the Kevin Durant injury situation. In it, Sam Presti stated that Durant’s original fracture of his fifth metatarsal was beginning to show signs of regression. After consulting with three medical experts, the Thunder and Durant’s camp agreed that he would have a bone-graft procedure to further assist in the healing process. Durant is expected to return back to basketball activity in the next 4 to 6 months.

The Thunder likely knew about this a week ago when Presti originally had a press conference to update the media on Durant’s progress. After further tests and scans, the original diagnosis was confirmed. The Thunder currently sit in the 8th spot in the Western Conference, three games ahead of 9th place Phoenix.

Here’s the original press release from the organization. http://www.nba.com/thunder/news/pressrelease_durant_150327