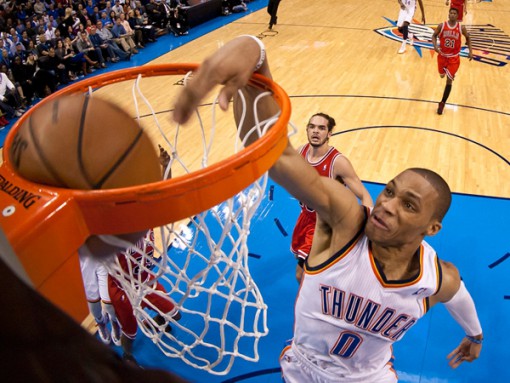 One of the things the trade deadline did for the Oklahoma City Thunder was give them the option to play in a variety of manners. The time where Oklahoma City’s roster was littered with one-way players has gone by the way side. In its stead, the Thunder now have a roster full of players that, while not necessarily top notch on either end of the floor, are usually able to be net-positives in their time on the floor. In that same token, if a certain player is struggling, then another is waiting in the wing to pick up the slack. That overall depth is something that has been lacking since the days of James Harden, Eric Maynor, and Daequan Cook. And even though the Thunder played a team that could possibly end up with the first pick in the next draft in their last game, that depth is the reason why the Thunder were able to survive a line-up shuffle that saw them with Kevin Durant and Serge Ibaka.

This is the 2nd, and final, meeting of the season between these two teams. The Chicago Bulls won a thriller a week and a half ago, 108-105, on an unlikely E’Twaun Moore 3-pointer in the final seconds of the game. The Thunder wasted a 43 points, 8 rebounds, and 7 assists masterpiece by Russell Westbrook, as the defense could not hold on to the 7 points lead they had going into the 4th quarter. 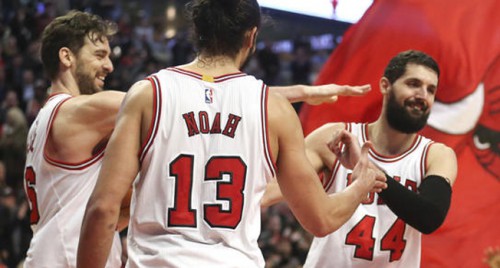 The Chicago Bulls come into this game with a 40-27 record, good for 4th in the Eastern Conference. Since they last met the Thunder, they’ve gone on to lose 4 of their next 5 games. Their problem in that span has largely been defense, as they have given up an uncharacteristic 102.2 points per game in that stretch. With Derrick Rose, Taj Gibson, and Jimmy Butler still sidelined, the Bulls will have to depend on their defense to win games. The patch work back-court of Aaron Brooks and Tony Snell have kept the Bulls afloat with their occasional good games, and Mike Dunleavy Jr has provided the perimeter threat the Bulls lacked when he and Doug McDermott were out with injuries earlier in the season. Up front, Joakim Noah has been a bit hobbled, but will likely play in Sunday’s game. Pau Gasol continues to have one of his better season, posting 18.4 points and 12.1 boards per game. Off the bench, rookie of the year candidate Nikola Mirotic has been a revelation of late, averaging 15.2 points and 7.2 rebounds since the All-Star break.

1. Line-Up Changes – From now until the beginning of the game, there may be a lot of moving parts. Serge Ibaka (knee), Enes Kanter (knee), and Steven Adams (hip) all sat out practice on Saturday. Joakim Noah was extremely hobbled in their last game with a knee ailment and may be a game time decision. As I wrote in the opening paragraph of the preview, the Thunder are a lot better equipped to handle these types of situations now than they have been in the past.

2. Turnovers – More specifically, Russell Westbrook’s turnovers. Westbrook is averaging 9 turnovers per game in the last 3 games. For as great as he has been, he could be better. Westbrook’s turnovers are usually of the live-ball variety, which increase the opponent’s transition opportunities. If Westbrook could maybe cut that average down to 4, the Thunder will be able to hold on to leads and cut into deficits a lot better. 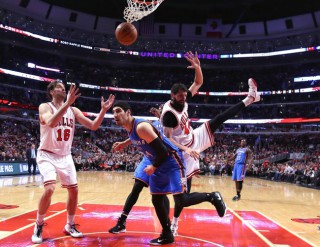 3. Nikola Mirotic – The Thunder had no answer for Mirotic in their first meeting. Even though he didn’t shoot it great from outside, he controlled the action offensively. The Thunder bigs were afraid of his ability to make 3’s, so they flashed out everytime he got the ball on the perimeter. And when he pump-faked, they jumped. He is quickly becoming a prime-time player, and Thunder will have to find someone to keep him in check.