There won’t be a riveting MVP speech or a controversial headline this time around. The Oklahoma City Thunder know what’s at stake. Lose tonight, and you go back to the lion’s den facing elimination. We did it in the last series, but why keep testing the law of averages? When a lower seed has a 3-2 lead heading into Game 6 (their court), they win 65% of the time.

For the first 39 minutes of Game 4, the Thunder were on cruise control. They led 32-15 after the first quarter, led by 11 heading into halftime, and increased that lead by 1 heading into the 4th quarter.  Three minutes into the 4th quarter, the Thunder were up by 14 points. Then, the Thunder stopped defending the paint. And when they attempted to defend, they ended up fouling. The Clippers had lay-ups or dunks on 11 of their last 12 made FG. In that same time frame, they made 8-9 FTs. The Thunder couldn’t keep up and ended up getting outscored 33-17 in the final 9 minutes of the quarter.

1. In-Game Adjustments – During the Clippers’ run in the fourth quarter, Scott Brooks had his vaunted small-ball lineup in the game. The Ibaka-Durant-Butler-Westbrook-Jackson lineup is great in close games or in making up a deficit (as evidenced by Game 3). But if you are up big and the opposing team starts to make a run, shouldn’t you start to sub in your defensive specialists? Brooks didn’t bring in Thabo Sefolosha until 2:57 was left in the quarter and the Clippers had trimmed the Thunder lead down to one. From there on in, it was a game and the Clippers had all the momentum. Brooks needs to be quicker in making these types of decisions.

2. Get Kevin Durant moving – A lot like how Kendrick Perkins likes to move other centers out of their comfort spots, smaller, stronger defenders like to push Durant away from his comfort zones. If the Thunder and their offense can get Durant on the move (catching passes off a curl, using a pick, moving without the ball), it takes away the advantage smaller defenders have on Durant. But if Durant remains stationary, the defense is able to set itself up to defend him.

3. Defend the Paint – The staple of the Thunder defense was completely obliterated in the 4th quarter of Game 4. The Thunder pride themselves in defending the paint, even to the extent that they dare you to shoot and make deep perimeter shots. As I mentioned in the 2nd paragraph, the Clippers last 11 of 12 made shots were either lay-ups or dunks. The other made shot was a 3-pointer by Jamal Crawford after the defense collapsed on a penetrating Chris Paul. What worried me in Game 5 is the Thunder focusing a lot of their energy on defending the paint and the Clippers going off from deep like they did in Game 1. There needs to be good defensive balance. 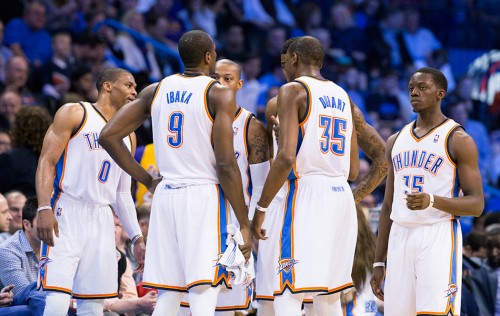 5. Defend Home Court – Win tonight, and you have a little bit more room for error heading back to LA. The Thunder have been quite vulnerable at home the postseason, posting a 3-3 record.