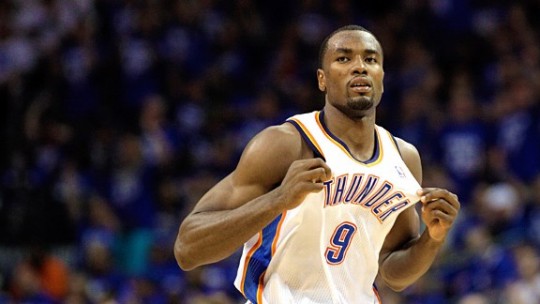 On Friday, the Thunder released a statement stating power forward Serge Ibaka had progressed enough in his recovery from a strained calf to be upgraded from OUT to DTD (day to day). With the Thunder being down 0-2 in the Western Conference, is this the boost they severely need to get back in the series? Here are three thoughts on what could happen with Ibaka’s return:

I know. This isn’t Game 7 of the NBA Finals in Madison Square Garden. During those days, most fans didn’t know who the starting line-up of a team would be until they started warming up. With the 24/7 sports news cycle that we have nowadays, there was no way that Ibaka was going to surprise the masses by walking into the arena right after the national anthem while ripping off his warm-ups to reveal his uniform and a heavily tape calf muscle. (Side bar: That would have been EPIC, though.)

It isn’t the same….but it almost feels like it. We’ve already been on the brink of elimination this season. Games 6 and 7 of the Memphis series and Game 5 of the Clippers series. All games that we needed to win, and did. This feels like that type of game. Throwing all the “nobody has ever come back from an 0-3 deficit in the history of the NBA” talk out the window, this is the make it or break game. Either we win tonight and make a series out of it or we go down like a sinking ship.

The emotional boost Ibaka’s return could provide may prove to be the spark the team has needed since the series began. Without their defensive anchor in the middle, the Thunder have looked lost on both ends of the floor. Their spacing on the offensive end has been Charles Barkley turrible, and their paint defense (and subsequent perimeter defense) has seen better days. Even if Ibaka doesn’t provide you with much, the fact that he is there may be enough to see the Thunder through this game.

Remember, for all the hoopla surrounding Reed’s return in Game 7, he only went on to score 4 points in the game. But the defense he played on Wilt Chamberlain in his 27 minutes in the game, proved to be the deciding factor in the Knicks winning their first championship.

The Great Unknown for the Spurs

This can work in the Thunder’s favor though. If the curiosity over Ibaka’s health gets the Spurs to deviate from their game plan even one bit, then the Thunder could have a marked advantage. This is the Thunder’s one trump card. Once the Spurs have film on how the Thunder plan to use Ibaka, the surprise factor of Ibaka’s return goes out the window. That’s a big reason why Game 3 is so important to the Thunder.

What will Ibaka give the Thunder? 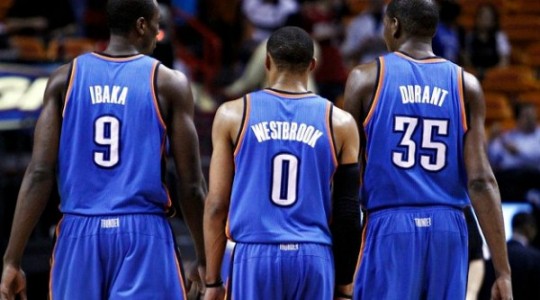 One thing for certain is that Ibaka would not be out there if he had not received the go ahead from the team doctors. The Thunder organization is very meticulous about not putting their players at risk of further injury, regardless of what is at stake. If there was any concern about compounded injury to Ibaka, he would have been held out. Is there a risk of reinjury? Of course. Kendrick Perkins played with an oft-injured groin in the 2012 playoffs, and had to sit out the 2nd half of at least 2 games in that playoff run that went all the way into the Finals. Calf muscles, much like the groin, are heavily used in basketball and the risk of reinjury is there.

But I think Ibaka’s return will have more of a psychological impact on the team. No team in the NBA is more dependent on their core players than the Thunder. So even if Ibaka is not at 75%, just having him out there may ease some of the stress that the Thunder seem to be playing with. And if that is the case, then his return will have been a rousing success.

If you are a guaranteed playoff team and are satisfied with your seeding, the last month of the season is more like a playoff preseason. The team wants to work out any kinks in order to be a well-oiled machine heading into the playoffs. But a team also wants to either rest it’s top players or get them healthy by the time the second season starts. The Thunder are firmly entrenched in the No. 2 slot of the Western Conference. Barring a collapse by the Spurs or an uprising (with a Thunder collapse) of the Clippers, this is where the Thunder will be when the playoffs begin.

The Thunder will be going for their 2nd 4-game regular season sweep of a Texas team when they travel to Houston to take on the Rockets. The Thunder have won the first three games of the season series by an average of 17 points.

The Rockets are currently 49-25 and in the 4th spot in the Western Conference. They are trying to hold off the Portland Trailblazers who are 1 game behind them and charging fast. Injuries are starting to rear their ugly heads in Houston and have had a profound effect on the Rockets in the last 3 games. Defensive stalwarts Dwight Howard (ankle) and Patrick Beverly (knee) have missed the last 3 games, and the Rockets have given up an average of 110 points in that trio of games.

1. Defense – Who ever plays defense in this game will win it. With defensive stalwarts like Howard, Beverly, Sefolosha, and Perkins out with various injuries, offense will be the law of the land. All things being equal offensively, the Thunder have a better defensive foundation and should be able to lock the Rockets down enough to pull out a victory.

2. Desperation – While the Rockets may not be “fighting for a playoff spot” desperate, they are fighting to, at least, maintain home court in the first round. The Rockets have lost 3 in a row, while their pursuers, the Trailblazers, have won 4 in a row. Luckily for the Rockets, they own the tiebreaker between the two teams. 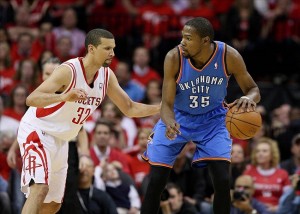 3. The Streak – Kevin Durant’s scoring streak could possibly reach mythical proportions tonight as he goes for 40 straight games of 25+ points. You can bet that Francisco Garcia will try his hardest to prevent Durant from continuing his streak. If achieved, he will be in the company of greats. Names like Michael Jordan, Oscar Robertson, and Wilt Chamberlain will be associated with Durant. In fact, its almost a good place to start a Mt. Rushmore conversation….or not.