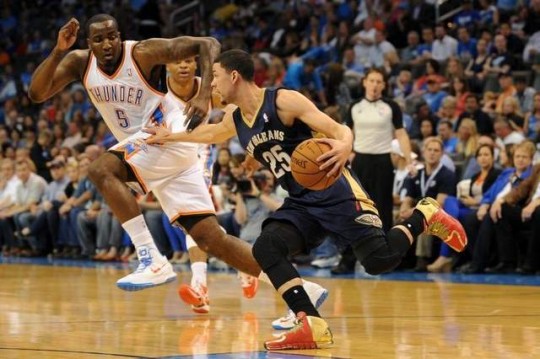 This will be the 4th and final meeting of the season between these two teams. The Thunder defeated the Pelicans last Friday, 116-94, for the 10 consecutive time dating back 3 seasons.

The Pelicans come into the game having lost their last 8 games. Injuries have completely decimated their season, as their top 6 players are likely to be out for the rest of the season (if Tyreke Evans sits out the rest of the year). Unfortunately, their ineptitude in the wins department probably will not yield them a lottery pick due to a draft day deal from last June that netted them Jrue Holiday from the Philadelphia 76ers. With all those injuries, the best players the Pelicans have left are role players, at best.

Edit: Apparently, Greg Stiemsma was waived today. So, obviously, he will not be starting at the 5. More than likely, Withey will be the 5 and Al-Farouq Aminu or Luke Babbitt will play the 4.

1. Point Guard – With the Thunder playing yesterday, this is a scheduled rest day for Russell Westbrook. Also in that game, Reggie Jackson suffered an apparent neck/back injury when he got sandwiched in a pick and roll. This may be first time since December 2008 that Westbrook or Jackson doesn’t start a game at point guard for the Thunder. With the importance of having everyone as healthy as possible for the playoffs, look for the Thunder to exercise caution and sit Westbrook and Jackson.

2. Bench play – Without an emergency 4th point guard, look for the Thunder to use Jeremy Lamb more as a play-maker. Also, with Nick Collison’s body looking like it was used as a stunt double for Russell Crowe in Gladiator, look for Perry Jones to get some run at one of the forward spots.

3. Get it done – Win tonight, and the next game only matters to the rookies and 2nd year players on the roster. This team is primed for the playoffs and is just frothing at the mouth to get it started.