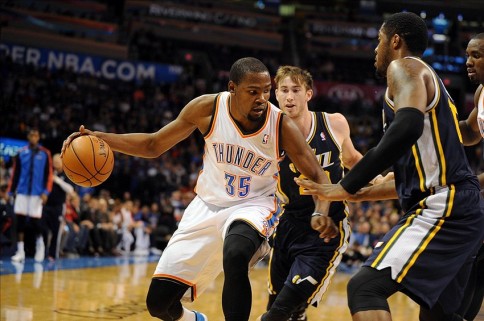 Two up. Two down. Two up. There are just some teams you look forward to facing, especially when you need an easy victory. The Boston Celtics were a welcome sight on Sunday. And the same could be said about the Utah Jazz tonight. With the Thunder looking to solidify their footing in the Western Conference while awaiting the return of Russell Westbrook, facing teams like Boston and Utah makes life that much easier for the team as they trudge along without their star point guard.

This is the 3rd meeting of the season between these division rivals. The Thunder won the first game, 101-98, behind 42 points from Kevin Durant. The 2nd game was much more one-sided with the Thunder winning 95-73. The common denominator in both games was that Russell Westbrook was inactive for both, with him recovering from surgery in the first game and resting in the second meeting.

The Utah Jazz are a bad team, either by design or by happenstance. They currently sit at 11-25 and are in the bottom third of most statistical categories. It’s no secret that Utah is currently in a rebuilding phase. Their core consists of young players who are still learning the nuances of the game. Rookie point guard Trey Burke is starting to show flashes of what made him the National Player of the Year in college basketball last season. Gordon Hayward is their leading scorer at 16.5 points per game and has started to get his game back after starting the season abysmally. Up front, Derrick Favors is close to averaging a double double, while Enes Kanter has fallen out of the starting line-up and is one of the key reserves off the bench.

Serge Ibaka is out with flu-like symptoms.

1. Small ball – Utah trots out a starting line-up that basically features a point guard, 3 small forwards, and a power forward. This may be one of those games where the strengths of Kendrick Perkins and Steven Adams are marginalized. If Scott Brooks decides to keep a traditional line-up in the game for too much time, it may come back to bite the Thunder in the rear. 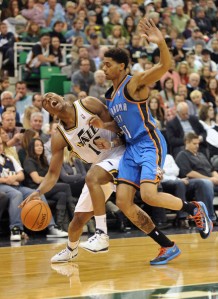 2. Bench – Utah’s bench, like it’s team, is loaded with young developing players. While the Thunder’s is also filled with young player, I think there’s enough veteran leadership off the Thunder’s bench to take advantage of the Jazz’s youth off the pine.

3. That man Kevin – Kevin Durant has been on a tear lately and Utah doesn’t really have any one that can cover him. Feast Kevin, and hopefully, enjoy the 4th quarter on the bench.

Trap game. This game has that written all over it. With only 3 games in 7 nights, this is the middle of the three, and probably, the least to look forward to. The Thunder beat the Los Angeles Clippers on Thursday, and have a prime time match-up with the San Antonio Spurs coming up on Wednesday. This will be a Sunday night game against the worst team, record-wise, in the league, with a crowd that will probably small and subdued due to the weather outside.

The Thunder faced the Jazz in Utah for the first game of the season. At that time, the Thunder were still trying to get used to life without Russell Westbrook, and struggled from start to finish. The still pulled out a 101-98 victory, but needed 42 points from Kevin Durant to do it. Surprisingly, after coming back in the 3rd game of the season, the Thunder organization has chosen this game for Russell Westbrook to rest. Hopefully the rest of the Thunder players will be a little bit more up to the task in this game and won’t need nearly 40 minutes each from Durant and Serge Ibaka to pull out the game.

1-13. That’s all you really need to know about the Utah Jazz. They are 29th in the league in points per game at 89.6. And they give up an average of 100.6 ppg. Plain and simple, this is a bad team, but also a very young team. Rookie Trey Burke will make his first start of the season after coming back from a broken finger. He’ll be flanked in the back court by Gordon Hayward and Richard Jefferson. Up front, the Jazz have a good young tandem in Enes Kanter and Derrick Favors. Off the bench, the Jazz use young, athletic players like Alec Burks, Marvin Williams, Jeremy Evans, Diante Garrett, and Rudy Gobert. END_OF_DOCUMENT_TOKEN_TO_BE_REPLACED

The Oklahoma City Thunder open up their season against the Utah Jazz on the road. The Jazz are in the beginning stages of a rebuild and will probably be one of the bottom tier teams in the Western Conference, if not the league. The Thunder won the season series last year 3-1, but this is a completely different Jazz team. END_OF_DOCUMENT_TOKEN_TO_BE_REPLACED 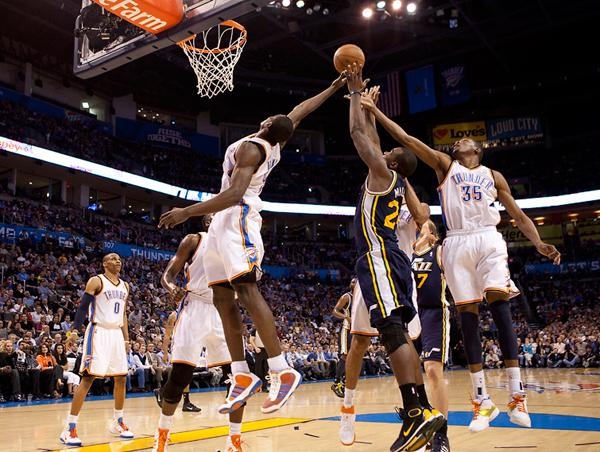 It was great to watch the Tulsa 66ers play, what amounted to, an entire NBA game this past week. Whether it was Reggie Jackson making a nice dish, Daniel Orton carving out space and grabbing a rebound, Perry Jones III showing flashes of his crazy athleticism, or DeAndre Liggins playing full court defense when his team is up by 20, it was good to see that the Thunder’s youth movement in full effect. It’s a shame that Jeremy Lamb was out with a lower back strain during this four game blowout streak, because he would have had plenty of time to show off his 3-point stroke. But alas, all good things come to an end and I think the easy road ends tonight, when the Thunder play division rival Utah in Salt Lake City.

These two teams have previously met one time this season, in late November at the Chesapeake Energy Arena. The Thunder beat the Jazz by a score of 106 – 94, in a game that almost featured a quadruple double by Russell Westbrook who finished with 23 points, 13 rebounds, 8 assists, and 7 steals. After being down by 16 to start the 4th quarter, the Jazz got it down to a 5 point deficit, but eventually got a steady dose of Westbrook and Durant, and succumbed to the Thunder down the stretch.

The Utah Jazz come into the game with a 28-24 record, good for 7th in the Western Conference. Statistically, they are a middle of the road team, averaging 98.1 ppg (11th in the league) and allowing 98.8 ppg (18th in the league). The Jazz are in the weird position where they are trying to jump start a youth movement, but are still good enough to get into the bottom seeds of the playoffs. They are led by their two big men, Al Jefferson and Paul Millsap, who are both on the trading block due to their cost and impending free agency. Together they average 32.3 points and 16.8 rebounds per game. Marvin Williams rounds out the front court. On the perimeter, the Jazz have had a revolving door of point guards, to include Earl Watson, Jamaal Tinsley, and Randy Foye. All have been effective for short stints and then get replaced by the next point guard in line. The intriguing players for the Jazz are the one coming off the bench. This is the youth movement that the Jazz is looking to unleash once it gets out of all of its long term contracts this offseason. The Jazz have to see what they have in Alec Burks, Enes Kanter, Derrick Favors, and Gordon Hayward.