When you are in the hunt for a playoff spot, you always look in two direction: the teams ahead of you in the standings and the teams you are warding off. Now that the Oklahoma City Thunder are firmly in the 8th spot in the Western Conference playoff race, the most important task is staying ahead of New Orleans and Phoenix. Catching up to San Antonio and the Clippers would be nice, but with the main objective already met (getting to the 8th seed), it’s all about maintaining their current positioning from here on out.

This is the third meeting of the season between these two teams. The Thunder have won the previous two games. The first game was a blowout with Oklahoma City winning 112-88. The second game had a playoff feel to it and even had some extracurricular theatrics that ended with Russell Westbrook being ejected from the game right before halftime. Kevin Durant carried the team in the 2nd half and they eventually outlasted the Suns in overtime, 137-134. 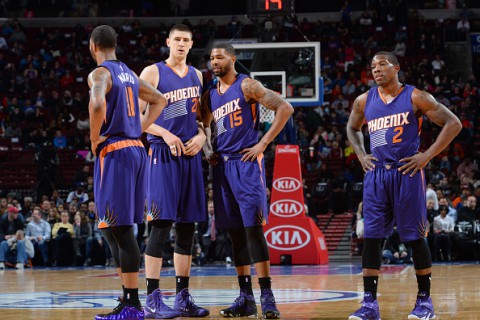 The Phoenix Suns come into this game with a 30-28 record, good for 10th in the conference (2.5 games back of the Thunder). The trade deadline completely changed the look of the team, with Goran Dragic, Isaiah Thomas, and Miles Plumlee being shipped out in separate deals that basically netted the Suns Brandon Knight and trade fodder. It should come as no surprise that the Suns have struggled, losing 8 of their last 10 games. While still a high scoring outfit (106.1 points per game – 3rd in NBA), they allow the 3rd most points per game (105 points per game) and are 18th in the league in rebounding. With the departure of Dragic, Bledsoe becomes the undisputed leader of the team. Joining Bledsoe in the backcourt is the aforementioned Knight. PJ Tucker takes on the position of 3 and D wing, and is one of the more underrated ones in the league. Up front, Markieff Morris and Alex Len give opponents a contrasting front court, with Morris being more perimeter oriented, and Len being more post-oriented. Off the bench, Marcus Morris, Gerald Green, and Brandan Wright give the Suns an explosive reserve unit that can be a problem if they get hot.

1. Perimeter Defense – Outside of Alex Len and Brandan Wright, everyone else on the Suns is perimeter-oriented. Brandon Knight and Eric Bledsoe do a good job of serving as facilitators, while everybody else waits on the perimeter for an open shot. It starts with keeping the two guards in front of the defense. If Westbrook, Roberson, DJ Augustin, and Dion Waiters are up to task, this should mute the effectiveness of the Suns’ attack.

2. Rebounding – Being such a perimeter-oriented team keeps a lot of the Suns players outside the paint. Hence their No. 18 ranking in rebounds per game. The Thunder on the other hand, usually have at least 3-4 players crashing the boards on the defensive end, while the Thunder bigs are known for crashing the offensive glass. Keeping the Suns to one and done on the defensive end of the court, while grabbing a couple offensive boards on the other end of the floor will go a long to securing the victory in this game.

3. Russell Westbrook – He’s reaching the point where Durant was last season when he was bestowed the name Slim Reaper. The point where it is must see TV to see what crazy stat-line Westbrook will put up. Everyone keeps saying his play of late is not sustainable, but he’s not doing anything different than he’s done throughout his career. 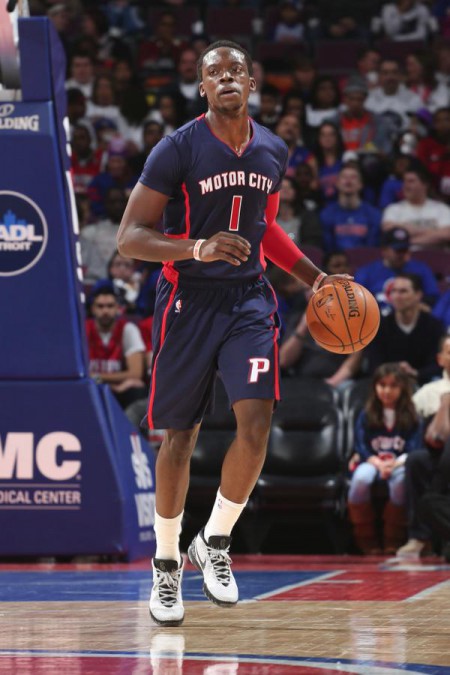 Let me preface this by saying I wish Reggie Jackson nothing but the best in his future endeavors. He’s a part of the Oklahoma City Thunder family tree and will forever be linked to the organization one way or another. As is usually the case with break-ups that are other than amicable, the ugly details leading up to the split usually don’t become apparent until after the split is finalized.

Jackson’s season with the Thunder up until the trade deadline had been, in a word, underwhelming. With Kevin Durant and Russell Westbrook missing games due to injuries in the beginning of the season, Jackson was tasked with leading the Thunder during that rough patch. Jackson actually did a commendable job in the absence of the superstar duo. Not only were Durant and Westbrook out, but other key contributors such as Perry Jones, Anthony Morrow, Jeremy Lamb, and Andre Roberson were also shuffling in and out of the line-up due to various injuries. In the 13 games in which both Durant and Westbrook missed, Jackson averaged 20.2 points, 5.2 rebounds, 7.8 assists, and 1.1 steals on 41.6% shooting from the field and 27% shooting from the 3-point line to go along with 4.7 free throw attempts per game. The numbers were very “Westbrookian,” but the team ended up with a 3-10 record during that stretch.

Despite the record, though, Jackson’s game showed signs of improvement from the previous season during that 13-game stretch. It was exciting to think of the prospects of Durant and Westbrook getting healthy and Jackson continuing this type of play. The feeling was that it would give the Thunder a 3-headed monster that hadn’t been seen since the days of James Harden. The Thunder, for as rough as the start of the season has been, would get healthier throughout the year and would, hopefully, form a sort of juggernaut that would be hard for teams to contain. 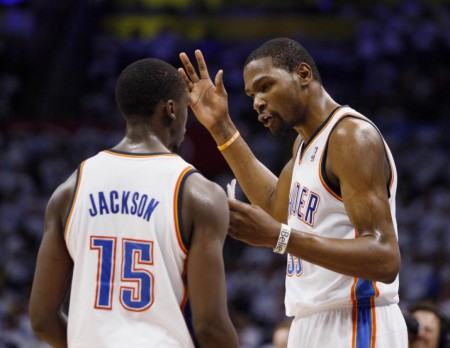 Instead, Jackson’s play progressively tapered off from the first month of the season. He eschewed his bread and butter (driving to the basket) in favor of step back 20-footers and unreliable 3-point attempts. He waffled on defense, consistently getting beaten off the dribble and almost never putting forth the effort to recover. He visibly pouted on the court and the frustrations from his teammates grew as the season pushed on. In the 37 games after Westbrook returned from injury, Jackson, as a reserve, averaged only 10.2 points, 3.1 assists, and 3.6 rebounds on 44.3% shooting from the field and 28.4% shooting from deep, while only attempting 1.5 free throw attempts per game. His minutes dipped every month of the season, going from 38.2 in November to 28.4 in December to 21.1 in January and finally to 19.2 in February.

The writing on the wall became clearer when the Thunder traded for Dion Waiters in early January. There was no reason for the Thunder to trade for another high volume scorer/shooter if their intentions were to keep Jackson for the rest of the season. The minute Waiters joined the team, Jackson’s minutes took a hit and he was relegated to 8th or 9th man duties off the bench. The two bench scorers seemed to get in each other’s way when they were on the court together. Sometimes it worked, but most of the time it was ineffective. Another sign was that Waiters and Morrow were closing close games out, instead of Jackson.

The Thunder knew there was a possibility this would happen. Starting from the end of last season, Jackson was not shy of letting his intentions be known that he wanted to not only start, but also to lead his own team. With that statement, Jackson basically drew a line in the sand. If this was a team that had any instability at the point guard position, that might have been an option. But the Thunder are as stable at point guard as they are at small forward. There was no possibility, outside of a catastrophic injury, that Jackson would leapfrog Westbrook on the depth chart. The organization gambled on the hope that the starting comment was actually a leverage play to get more money. But, apparently, Jackson really wanted the opportunity to lead his own team.

On that merit alone, I do not fault Jackson. As recently as a couple weeks ago, I wrote an article outlining why Jackson may have been holding back. Some people are content with falling in line and playing their role. Others want to explore all the possibilities laid out in front of them. Jackson fell into the latter ilk. He wanted to see how far he could push himself, and that wasn’t going to happen as a reserve on the Thunder. So for that, I do understand Jackson’s stance.

Then the trade happened. At first, I was happy for Jackson. He would finally get his chance to lead his own team. And to boot, it was a pretty good team, with talented young teammates (Andre Drummond, Greg Monroe, and Kentavious Caldwell-Pope). But then, honest Reggie had to open up his mouth, or Twitter account.

Really? Tears of joy? I understand finally getting your opportunity to prove yourself, but this tweet seems more apropos for something the ancient Israelites would say after they crossed the parted Red Sea lead by Moses. I mean, was Jackson caged in a dungeon and only allowed out to practice and play in games? Of course, Jackson then sent out 3 consecutive tweets thanking the community and the Thunder for his time in Oklahoma City. To me, the first tweet was much louder than the other three tweets that followed.

The worst part is that I actually like Reggie’s honesty. He was genuinely pained, and visibly upset, for the people of Moore when the tornado struck a couple years ago. He was visibly emotional after Game 4 of the Memphis series; a game in which Jackson single handedly kept the Thunder in the game and in the series. His honesty was a welcome antithesis to the manufactured answers most sports figures give in interviews. But, as Jackson showed, that honesty can cut both ways.

Then, Jackson played his first two games for the Pistons. And that’s when it really started bothering me. What we saw in those first two games with the Pistons was the Jackson from the beginning of the season and from last season. The Jackson that can put up 19 points, 7.5 rebounds, 7 assists, and 5 free throw attempts per game. The Jackson that could change a game with his ability to drive into the lane. That Jackson could have helped the Thunder immensely throughout this crazy season. Instead, we got 70% Reggie Jackson from December on. I understand wanting a change of scenery. But now I realize, I can’t respect the way Jackson did it. So for that, I say, good riddance Reggie Jackson.