Most games in the regular season are not must-wins. Teams battling for the 8th spot in their respective conferences at the end of the season face must-win games. Teams on the brink of elimination in the playoffs face must-win games. But games in December can rarely be labeled must-win games. Even if the Thunder lose tonight, they are still well on pace to get into the playoffs comfortably. So while it isn’t a must-win game, it definitely is a “want to”-win game. After starting the season off in shambles due to injuries, it sure would be nice to send a message to the rest of the league that we are back.

This is the second of four meetings between the Thunder and Golden State Warriors. The under-manned Thunder played the Warriors valiantly in their first meeting, losing 91-86. That is the lowest point total the Warriors have been held to all season. 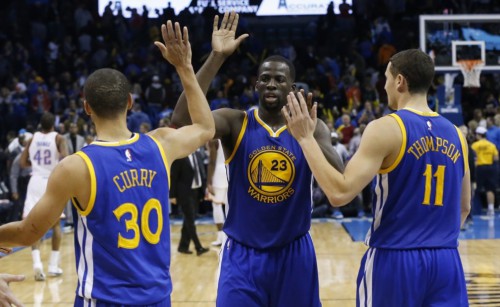 The Golden State Warriors currently sit perched atop of the rest of the league with a 21-3 record. After winning 16 in a row, the Warriors lost their last game to the Memphis Grizzlies in Memphis. First year head coach Steve Kerr has jumped out to the best 24 game start to begin a coach career in league history. The Warriors rank in the top 10 in most major statistical categories. Their defense is predicated on blowing up pick and rolls and forcing you to take mid-range shots early in the shot clock. On offense, the shooting of Steph Curry and Klay Thompson (or the fear of them shooting) creates a ton of space for them to do their work and for others to get open. The Splash Brothers are currently averaging 45.2 points, 8.9 rebounds, 10.9 assists, and 3.2 steals per game on 46.6/41.0/89.5% shooting splits combined. This backcourt is highly efficient and each player is capable of exploding for 35+ points on any given night. Because of David Lee’s injury and Andre Iguadola’s move to the bench, Kerr has been going with Harrison Barnes and Draymond Green at the forward spots. Barnes plays more of the small forward role, while Green has been a  terror as an undersized stretch-4. Both players are shooting over 35% from deep this season. Up front, Festus Ezeli mans the middle in place of the injured Andrew Bogut. Off the bench, the aforementioned Iguadola, Marreese Speights, and Shaun Livingston give the Warriors a veteran reserve bunch that will not lose them many games.

1. Transition Defense – There’s a reason why the Warriors are No. 1 in the league in pace: their fast breaks don’t have to go all the way to the rim. The Warriors are just as happy shooting up 30 footers while the defense is getting set back up as they are gliding in for lay-ups. It’ll be extremely important for the Thunder to get back on defense as quickly as possible to contest anything from Curry and Thompson.

2. Match-up Landmines – The first match-up problem I see is Ibaka vs. Green. It would almost be better for the Thunder to go small from the beginning with Ibaka as the 5 and Perry Jones getting minutes at forward. Another match-up nightmare is Kendrick Perkins vs. Speights. This manifested itself the last time these two teams played, as Speights went off for 28 points off the bench on an array of mid-range jumpers against the slower Perkins. Another match-up problem could be Reggie Jackson vs. Livingston. Livingston has made a career of taking small pg’s down on the block due to his height advantage.

3. Sit back and enjoy – If you are a fan of basketball, these last two nights have been great. The Warriors/Grizzlies match-up on Tuesday was good and the triple-overtime thriller between the Grizzlies and Spurs last night was even better. But if you remember back to the first two games the Thunder and Warriors played last season, then you already have a blueprint as to how tonight might play out.