When the season first started, and it was known that the Thunder would start it without Kevin Durant and Mitch McGary, I tabbed the Thunder with a 7-10 record through November. Of course, other injuries occurred and kind of derailed that prediction. But in life, you are doing one of three things: either entering into a storm, going through a storm, or exiting out of a storm. The Thunder seem to be exiting out of their current storm. Tonight, they get back a player that has been severely missed in this early season swoon. When Grant Jerrett finally checks into the game, the will be a raucous celebration in the Chesapeake Arena.

Apparently, the cheering will be for none other than Russell Westbrook. Slowly, but surely, the pieces are starting to come back for the Thunder. This game is Westbrook and Jerrett. Next week, it could be Durant and McGary. Eventually, Lance Thomas will take his rightful place on the bench, cheering on his brethren in a nice tailored suit.

This is the first meeting of the season between these two teams, with identical 4-12 records. The Thunder beat the Knicks last season in both meetings by an average of 20.5 points. In what was tabbed in the beginning of the season as a match-up between great scorers, has now devolved into a match-up of teams trying to claw their ways back into their conference’s respective playoff races. 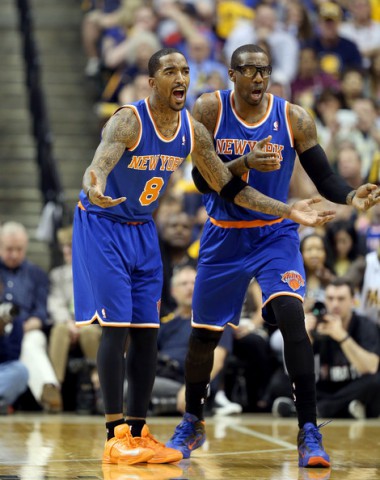 The Knicks come into the game with a 4-12 record in what has been a disappointing start to the Derek Fisher/Phil Jackson regime in New York. The implementation of the Triangle offense has flummoxed the players on the team, as they have struggled offensively out of the gate. The team, which features Carmelo Anthony and JR Smith, is scoring only 95.3 points per game, good for 25th in the league. The departure of Tyson Chandler also has the Knicks struggling on the boards, as they are only grabbing 39.3 rebounds per game, good for 26th in the league. The Knicks’ attack is led by Jose Calderon, who just recently came back from an ankle injury. On the wings, JR Smith and Iman Shumpert are as streaky as they come from the perimeter. Carmelo Anthony, who would normally start at the forward position, is out due to back spasms. Up front, Samuel Dalembert and Quincy Acy are veterans, but provide little else. Off the bench, Amar’e Stoudemire, Tim Hardaway Jr., Pablo Prigioni, and Shane Larkin are a mixture that is just as perplexing as the starting line-up.

1. Perimeter Defense – The Knicks lead the league in 3-point FG percentage. The don’t attempt that many 3’s, but they make enough to be the only team in the league with a 3-point shooting percentage above 40% (40.5% to be exact). The Knicks have little else in their arsenal but the 3-point shot. If it’s falling, the Knicks can hang with anyone. The key is to defend that 3-point line and make the Knicks beat you from inside and from mid-range.

2. Bench play – With Reggie Jackson returning to the bench, the Thunder’s bench get a huge boost. The Knicks bench is a mixture of Stoudemire and young wing players such as Hardaway Jr and Larkin. The Thunder, with Jackson, Morrow, and Lamb should be able to take advantage of this.