For the first time this season, the Oklahoma City Thunder have been on the high side in two of the last three games. This was the stretch that was supposed to balance out the gauntlet that was the first 6 games of the season. The Thunder have seemingly adjusted to this new normal and are starting to hit their stride. They’ve played with the same 10 players for the past 2 games, which is saying something for this season, and have some rhythm moving forward.

This is the first meeting of the year between these two teams. The Thunder swept the season series last season. They kept the Pistons at bay in their first meeting of the season (aka the Steven Adams coming out party), and then needed a furious comeback in the 4th quarter of the second meeting (which was also the last game of the regular season) to secure the No. 2 seed in the Western Conference. The Thunder have won the last 10 meetings against the Pistons, dating all the way back to 2009.

The Detroit Pistons come into the game with a 2-6 record. The Stan Van Gundy era has gotten off to a rough start as the Pistons have struggled to find their identity on offense. They are averaging 93.3 points per game, good for 25th in the league. A good SVG offense is inside/out heavy with a dominant big man surrounded by shooters. The problem with Detroit is that their big men aren’t quite dominant yet and their shooters aren’t hitting their shots consistently. Brandon Jennings and Kentavious Caldwell-Pope man the backcourt. Jennings has been surprisingly consistent this season, while Caldwell-Pope is still learning the nuances of the game. Up front, the Pistons are still trotting out the inconsistent, yet possibly terrifying trio of Greg Monroe, Josh Smith, and Andre Drummond. Smith is still inconsistent, but has shied away from taking so many 3-point attempts (going from 3.4 attempts last season to 1.5 attempts this year). Monroe has been their best player so far, averaging 17.3 point and 11 rebounds per game. The Pistons’ bench is of the more weaker ones in the league and features Caron Butler, Kyle Singler, DJ Augustin, and Jonas Jerebko.

1. Zone Defense – The defense has been trotting out a zone, especially in the 2nd and 4th quarters, that has been flummoxing opponents. The zone is especially dangerous when the Thunder are trotting out 3 bigs (usually Ibaka, Nick Collison, and one of either Kendrick Perkins or Adams). With Detroit’s tendency to be streaky from the perimeter, I would look for the Thunder to deploy this defense, especially when Detroit has their 3 bigs in the game. 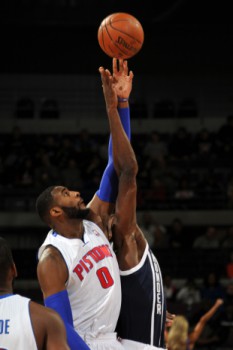 2. Rebounds – While Detroit appears to still be trying to figure out how best to use their three bigs, the one thing they can always do well is rebound. Between the three of them, they are averaging over 30 rebounds per game (with nearly 10 of those being on the offensive end). Detroit may miss a lot of shots from the perimeter, but they are able to buffer that by grabbing offensive boards. The Thunder may need “all hands on deck” in the rebounding department for this game.

3.  Perimeter Bigs – Ibaka and Collison may benefit the offense in this game by floating around the perimeter. Taking their man away from the paint, will allow Jackson and Sebastian Telfair room to operate and attack the paint.