Here’s a list of things that have happened since the Thunder last took the court:

As the Thunder head into the stretch run of the season, I think they sit pretty comfortably where they currently are. Would they like the No. 1 seed in the Western Conference? Of course. But the Thunder/Spurs dynamic is weird because the Spurs give everyone else fits (yes, even Miami), but we’re just about the team that gives the Spurs fits. It’s almost like we unlocked a cheat code when we beat them four straight games in the 2012 Western Conference Finals. Since that series, the Thunder have won 5 of 7 in the last two seasons, to include going 3 of 3 this season.

The Spurs currently find themselves at 59-16, atop the entire league in terms of record. They haven’t lost a game since February 21st (19 straight) and have been beating opponents by an average of 16.8 ppg during the streak. The streak has coincided with the Spurs getting healthier as the season has progressed. After losing Kawhi Leonard, Danny Green, and Tiago Splitter for parts of the season, the Spurs have regrouped and this streak has been the result. The constants this season, as has been the case every season for the past decade have been Tim Duncan, Tony Parker, Manu Ginobili, and head coach Gregg Popovich. The Spurs system is predicated on the defense collapsing on penetrators (Parker or Ginobili) or post players (Duncan) and kicking the ball out to a bevy of shooters who all shoot over 37.5% from 3-point territory. The bench is one of the stronger ones in the league with vets like Boris Diaw, Marco Belinelli, Ginobili, and Patty Mills all contributing starter minutes.

1. Preparedness – There’s a reason the Starting Line-ups section of this preview comes with the word Probable in front of it. When it comes to the regular season, you never know what Gregg Popovich is going to do. Mentally, you have to be prepared for anything. Many teams make the mistake of easing off the gas pedal when they see that Pop is resting a couple starters. The Spurs’ bench players are great in spurts and can make a team pay if they don’t bring their A game.

2. Perimeter defense – The Spurs have 7 players that average at least 18.5 minutes per game and shoot at least 34.3% from the 3-point line. As a team, they shoot nearly 40% (39.9) from the arc. To say the 3-point shot is a big part of San Antonio’s offense, would be a gross understatement. It will be interesting to see who starts out on Parker defensively. It’s usually Thabo Sefolosha, but with him out, will Westbrook remain disciplined and stay in front of Parker the entire game? 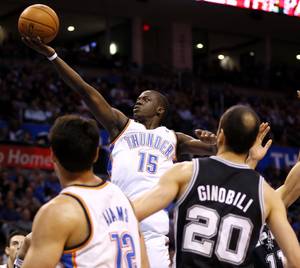 3. Reggie Jackson – Kevin Durant and Russell Westbrook will give you what they usually give you. But the Spurs killer of late has been Jackson. If he can take charge of the game when the bench is in the game, he could be the difference in the game.