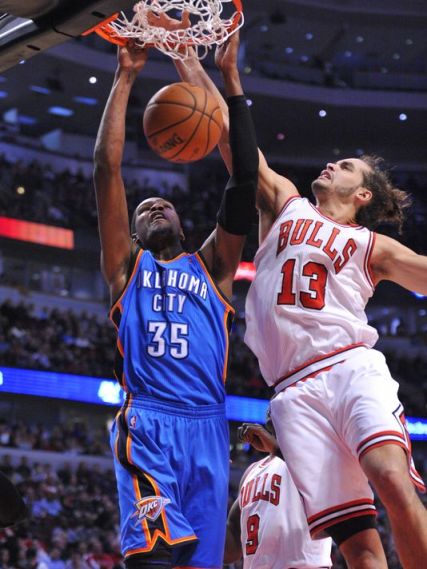 According to the Elias Sports Bureau, the Oklahoma City Thunder are now 0-1 when they are missing 3 starters this season. That’s some heavy fact finding right there. The loss last night doesn’t really bother me as much as the effort does. Many teams in the NBA will have a tough night when their starting PG, SG, and C are out. But most teams don’t have the supposed depth the Thunder have. That depth, though, is laced with a bunch of young players. That can be a gift and a curse. Teams like Miami, San Antonio, and the Clippers have veteran-laden benches with players that have started and starred before. But the Thunder bench consists of Derek Fisher, Caron Butler, Nick Collison, and a bunch of rookies and 2nd year players. When injuries push that pecking order up a bit, you can have nights of inconsistencies.

This will be the 2nd and final meeting of the regular season between these two teams. The Thunder won the first game in Oklahoma City 107-95. In that game, Kevin Durant had a near triple double with 32 points, 9 rebounds, and 6 assists, while Russell Westbrook had a double double with 20 points and 10 assists. For the Bulls, Joakim Noah led the way with 23 points and 12 boards. 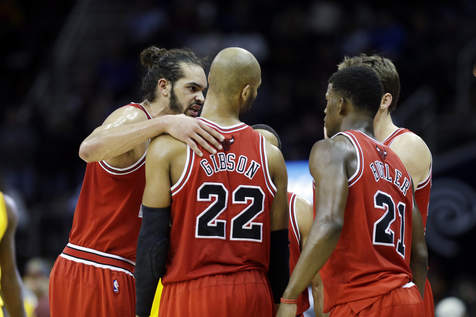 The Bulls this season have been a microcosm of the Bulls for the past 2 seasons. No Derrick Rose, lots of defense, great coaching, and a resilient bunch. That’s the Bulls in a nutshell. After losing Derrick Rose AGAIN! in late November for the rest of the season,  the Bulls went on a bit of a rough patch, losing 11 of their next 14. But Coach Thibodeau righted the ship, and the Bulls find themselves with a 37-29 record, good for 4th in the Eastern Conference. After trading Luol Deng to the Cleveland Caveliers, the Bulls found themselves without a consistent scorer. Enter Joakim Noah. Noah has been a revelation this season as an offensive weapon; not necessarily a scorer, but more as a point center, registering 3 triple doubles. Kirk Heinrich, DJ Augustin, and Mike Dunleavy Jr. have done a good job on the perimeter, while Noah, Carols Boozer, and Taj Gibson have done their thing in the post. Their bench is a bit thin, but can produce points with Gibson and Augustin.

1. Turnovers – The Bulls aren’t going to score many points (93.4 points per game – 30th in the league), but they may not need to. Backed by the best defense in the league, in terms of opponents’ ppg, the Bulls ususally win close games because of their defense. One of their tenants is to defend the paint and force turnovers. The Thunder have a tendency to get a bit careless with the ball, while will create more opportunities for the Bulls on the offensive end.

2. The Bench – The showing in the Dallas game was atrocious, to put it nicely. But the bench has done a good job of bouncing back this season after bad performances. Here’s to a bounce back game.

3. The Duo – The Bulls don’t really have anyone that can stick with Westbrook and Durant on the offensive end. If these two do their thing, while getting others involved, it could be a difficult night for the Bulls.