There are so many narratives to this game, I’m just going to bullet point every one of them:

This will be the first meeting between Westbrook and Beverly since the knee injury in last season’s playoffs. I would not expect any retaliation from Westbrook, as he has stated time and time again that he has no issues with Beverly personally. But OKC fans remember, everytime they see Beverly, that this is the man that not only crashed into Westbrook’s knee, but also, possibly, crashed into the Thunder’s chance at winning a title in the future.

Remember, the Rockets did hang 73 on the Thunder in one half in their last game. In that half, they made 11 three-pointers (8 in the 2nd quarter). That 2nd quarter was very reminiscent to what happened to the Thunder in the last two 3rd quarters. In those 3 quarters, the Thunder gave up an average of 39 points, which can be a back breaker that can be very difficult to come back from. The good news from that last Rockets’ game was what happened in the 2nd half. The Thunder buckled down on defense and allowed the Rockets to score only 19 points for the entire 2nd half. They will need to find some sort of middle ground to balance themselves out.

This team is no longer playing for each other. Too many guys have different agendas. Too many are doing their own thing. Too many are playing for the wrong reasons. Kevin Durant is gunning for his first most valuable player award. Reggie Jackson is playing for a lucrative extension this summer.Russell Westbrook is working himself back into shape. It’s selfish basketball, the kind we’ve rarely seen take shape in OKC. It doesn’t define all 48 minutes. But it’s seen in stretches. Far too many of them.

In addition, interviews in the last couple of days with Nick Collison and Derek Fisher, two of the elder statesmen of the team, don’t exactly ooze with words of team chemistry and kumbaya. This could just simply be a bump in the road or it could be more. It will be very interesting to see how the team responds tonight as they play one of their chief rivals in the conference.

Turnovers – Houston is a team that feasts on turnovers. They have an extremely athletic team that can turn and run on a dime. They usually have 3 capable ball handlers on the floor at all times. If the Thunder can limit the turnovers, then it’ll limit the opportunities the Rockets have on the offensive end of the floor. 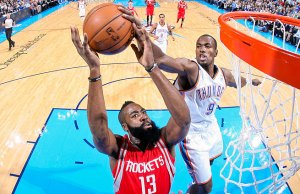 Defending the paint – In the last 2 games, the Thunder have given up 92 points in the paint! Also, the Suns and Lakers combined to take 69 free throws. Add those two things up and what does it equal??? Crappy defense. The perimeter players are playing the vaunted Ole’ defense, while the post players are either too slow on their rotations or hacking the drivers to send them to the line.