Last season I wrote about the Oklahoma City Thunder’s extensive use of their D-League affiliate, the Tulsa 66ers. After the Harden trade, the Thunder found themselves in the peculiar position of being a contending team, while also having a handful of players that they needed to develop. In the Harden trade, they received a good stopgap in Kevin Martin and an apt apprentice in Jeremy Lamb. The Thunder used Martin as their 6th man off the bench, and he performed serviceably for them, notching averages of 14.0 ppg and 2.3 rpg on 43% 3pt shooting. The wild card in the trade was Lamb, the rookie out of Connecticut who was the 12th pick in the 2012 NBA draft.

Lamb was used in spot duty throughout the season, but spent most of his time in Tulsa where he averaged 21 points, 5.3 rebounds, 3 assists, and 1.2 steals per game in 21 games. There is no doubt that that experience helped Lamb in his transition to be a major cog off the bench for the Thunder this season.

Reggie Jackson spent only 3 games in the D-League last season, but he made his mark known. His per game averages for those 3 games were an astounding 28 points, 7.3 rebounds, and 8.3 assists on 60% FG shooting and 36% 3-pt FG shooting. After that 3 game stint, Jackson went on to get the majority of the back-up point guard minutes on the team and eventually led to Eric Maynor being traded to the Portland Trailblazers. That move paid dividends when Russell Westbrook went down in the second game of the 2013 NBA playoffs. Jackson performed well in his first foray as an NBA starter. Even though the Thunder lost in the 2nd round of the playoffs, Jackson provided enough of a steady hand that the Thunder knew, regardless of how the Kevin Martin negotiations went in the offseason, that they had a true 6th man already under contract.

While Jeremy Lamb was an unknown heading into the season, it was known that he would be part of the rotation. What wasn’t known was how Perry Jones III would fit into the equation. Would he be in the rotation? Would he be shuffled back and forth between Tulsa and Oklahoma City? What is known is the Jones was a combination of size, speed, and athleticism that is unparalleled in the league, outside of Kevin Durant and Paul George. A 6’11 hybrid that can possibly play every position not named point guard.

The key to Jones’ success is if he ever learns how to harness all the raw talent and ability into something feasible on the basketball court. Early returns this season have proven inconclusive. He has shown flashes of being a good rotation player, but also gets caught doing a lot of floating on the floor. Also, due to the rotation, he may be the odd man out at the moment. A little bit of extra seasoning in the D-League may be beneficial to Jones. Not necessarily an entire season’s worth, but maybe 10 games in 3-4 game stints would do wonders for this development.

But these guys are old news. They have, for the most part, graduated from 66ers University. Jones may go back to take a class or two, but it is a given that he is NBA ready. Now it’s time to introduce the freshmen to 66ers University. Steven Adams, Andre Roberson, and Grant Jerrett were all drafted in the 2013 NBA draft by the Thunder. 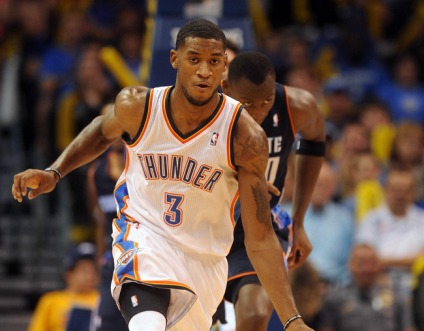 Steven Adams appears to be that virtuoso who will skip college and go directly to med school. He came into training camp and, surprisingly, won the back-up center role and has, for the most part, played starter minutes the entire season. Center is one of those positions that, depending on the match-up, may warrant 20 minutes in a game or 40 minutes in a game. He has performed well enough to continue in his current position. Sometimes he looks like a grizzled veteran out there, and other times he looks like a rookie. The thing with a rookie center that doesn’t need to dominate is that a 7 points, 5 rebounds, 2 blocks stat line can sometimes be considered great and it can sometimes be considered bad. The tools are there, so Adams just needs some refinement. I don’t think Tulsa will be in Adams’ future, but if he hits a rookie wall at any point, look for Adams to get a 3-5 game stint to build up his confidence.

The D-League was made for players like Andre Roberson. The hyperactive defensive savant out of Colorado is the kind of player that has a valued skill set, but needs further seasoning to refine it. That skill set is defense and rebounding. Roberson, on that alone, could be close to being a rotational player in the NBA. But, offensively, he needs a ton of work. In the NBA, a one trick pony can only last for so long. To be successful, you need to be able to play both sides of the floor. In Tulsa, Roberson will be able to develop confidence in his shot and learn what niche he can carve out to be an offensive threat on the NBA level.

Grant Jerrett came to the Thunder on a draft day deal from the Portland Trailblazers. The 2nd rounder out of Arizona has a tool that can be of high value to the Thunder in the future. On a team with great players that break down defenses and get into the lane, a 3-point shooter is of utmost importance to spread the floor. The more the defense is spread out the bigger the driving lanes get. Unfortunately, though, that is the only translatable skill he has at the moment. He’s a 6’10” stretch 4 that is a sieve on defense and offers little else on offense. The Thunder didn’t invite him to training camp, but instead, drafted him No. 1 overall in the D-League draft. That way, he stays in the Thunder’s system and could possibly be brought in next season as a stretch 4 for the Thunder.

In the past, on a contending team, players like Roberson would’ve needed to gain all their experience from practicing with the team. But the dirty little secret about the NBA is that there isn’t a lot of time for player development once the season starts. The team still practices, but a lot more of the practice is geared towards scouting the team they are playing next. That’s where the 66ers play a key role in the development of the Thunder’s young players. The most important aspect of the Tulsa 66ers is that the D-League team belongs to the Thunder. Not every team in the NBA has their own D-League affiliate. Many teams in the NBA share D-League teams, so there is no continuity between the NBA team and the D-League team. But with the Thunder owning the 66ers, there’s a continuity the helps in the development of the young players for the Thunder. The offensive sets remain the same. The defensive vernacular remains the same.

The days of a lottery pick being sent to the D-League and being labeled a bust are a thing of the past. With the NBA possibly pushing to get a 3rd round in the draft and more teams officially getting their own D-League affiliates, a lot of attention in the future will be placed on player development. The harsher luxury tax penalties will force teams to depend on player development, instead of on big free agent signings. Thunder GM Sam Presti has been ahead of the curve on this for some years now, and it is just now starting to pay dividends.