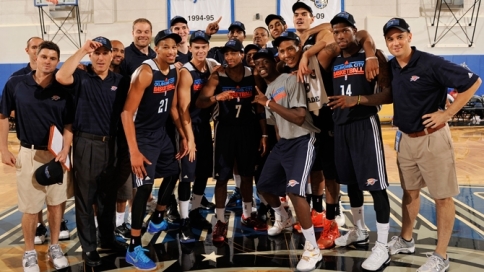 The Oklahoma City Thunder finished summer league with a 5-0 record, and were crowned champions of the first ever Orlando Summer League Championship. While it is cause for celebration, it’s important to remember that this is Summer League. A league where at least 50% of the participants will log as many minutes in the NBA as you and I. Regardless of talent level though, there were a lot of things to take from summer league. Here are a couple:

1. Reggie Jackson is ready to make The Jump. The Jump is the term for when a player starts to understand the nuances of the professional game and it slows down for them. Kevin Durant led the league in scoring his 3rd season, Russell Westbrook made it to his first All-Star Game and made 2nd Team All NBA in his 3rd season, and James Harden won 6th Man of the Year in his 3rd season. In his one full game in summer league, Jackson broke the Orlando Summer League record with 35 points, bringing the Thunder back from a 12 point 4th quarter deficit with 23 of those points coming in that final quarter. He completely dominated getting to any spot on the floor that he wanted. While I don’t expect a repeat performance during the NBA season, I do think that Reggie is ready to take that next step in his development. END_OF_DOCUMENT_TOKEN_TO_BE_REPLACED