The Oklahoma City Thunder are probably sick and tired of their decked out first class plane. I’m all for team bonding, and being on the road can accentuate this, but 8 road games out of 9 is a bit much in a 14 day span. Oklahoma City doesn’t have a circus in town, and when the rodeo comes, they only stay for a couple days. The last time they played at home, Jeremy Lin was still riding the pine in New York. Now, they hit the final leg of their tour, against division rival, the Utah Jazz. This will be the first of 3 meetings between the two teams this season. The Thunder won the season series last year 3-1, but the Thunder will find that this year’s Jazz team has a completely different look than last season’s.

The Utah Jazz have the definition of consistently inconsistent. They started off the season losing 3 of their first 4. Then the reeled off 9 wins out of their next 11 games. And now they’ve lost 6 of their last 9 games. They currently sit at 13-11, good for 3rd in the division and 8th in the conference. The Jazz are led by their front court of Al Jefferson and Paul Millsap. Together they are averaging 35 points and 18.6 rebounds per game. Though a bit undersized, they are one of the more formidable front courts in the league. Last season’s first round pick, Gordon Hayward, is rounding into a good role player providing more scoring, rebounding, and playmaking as the starting SF. The backcourt of Devin Harris and Raja Bell is veteran-laden, but a bit limited in all facets of the game. The bench for the Jazz can be inconsistent, with veterans CJ Miles, Josh Howard, and Earl Watson getting the bulk of the bench minutes. The Jazz’s defense is pretty suspect as they allow 97.2 points per game, which is 23rd best in the league.

Matchup to look out for 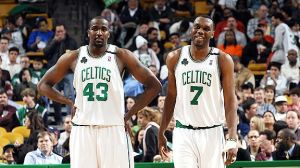 These two were supposed to be the future front court for the Boston Celtics in the early 2000’s. As both have attested to, they developed a great bond while in Boston and continue to be great friend off the court. Perkins tends to get up for games against rivals or old friends. He got Boston for 7 points, 5 boards, and 1 block earlier this season. And I know he’ll more than be up for this game tonight.

Interior defense. Millsap and Jefferson are very similar to Marc Gasol and Zach Randolph in that they aren’t overly athletic, but are very fundamentally sound and have good mid range games. For being undersized, Millsap is deceptively good on the interior. It’ll be very important that Ibaka, Perkins, Mohammed, and Collison stay with these guys at all times, as they have been know to drop 30 and 15 type games.

Offensive schema. There is no one on the Jazz that can consistently guard Kevin Durant or Russell Westbrook. Durant is so much bigger than Bell,Hayward, or Howard. And Westbrook is so much stronger than Harris and quicker than Watson. The key will be the shooters (Cook and Harden). If they are making their shots, the defense won’t be allowed to collapse on Durant and Westbrook, as their primary defenders will need help throughout the game.