We’ve been here before. Game 6 of the Memphis series (and the subsequent Game 7). The only thing different in this series is the team who holds the home court advantage. The Thunder will be playing Game 6 in the Chesapeake Energy Arena in Oklahoma City. And if this series holds true to form, then we’ll see a Game 7 on Monday. The home team has won by resounding fashion in each of the first 5 games of the series. There is no clear cut way to tell who has the advantage other than to say the Spurs have played much better in San Antonio than the Thunder have in Oklahoma City, but not by much.

Keys to the Game:

2. The Others – The Thunder players, not named Kevin Durant and Russell Westbrook, need to step up and help their superstar duo out. Other than Reggie Jackson’s 11 points (all in the 1st quarter), no other player on the Thunder roster came within 4 points of reaching double figures. The Thunder are at their best when “the others” are also scoring as it opens up the floor for their play makers (Durant, Westbrook, and Jackson).

3. Pick and Roll involving the PF when Duncan is the center – The Thunder have to take advantage of the pick and roll when the PF in the game is not Tim Duncan. Matt Bonner and Boris Diaw cannot keep up laterally with any of our guards and Ibaka and Nick Collison can hit the mid-range jumper. The Thunder took advantage of this in the first quarter (especially Reggie Jackson), but quit going back to it throughout the game.

4. Kevin Durant – Last time we questioned him, it was in the form of a headline. This time, I’m wondering whether he has anymore left in his tank. Durant is always talking about that extra level that he can reach, but so far, in these playoffs, its been Westbrook that has been the Thunder’s best player. For the Thunder to reach the next round, Durant will need to go more Slim Reaper or Junkyard Dog instead of settling for KD. 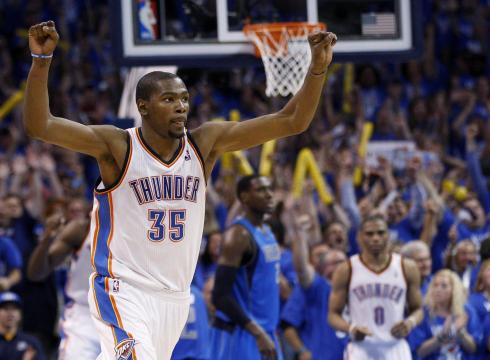 Three words come to mind when I think of this game: Return to normalcy. For the past 6 months, Thunder fans have been living on the edge regarding our present and our future. We’ve seen what life is like without Westbrook and we’ve seen Westbrook (surprisingly) come back for the home opener on Sunday. Now it feels normal. A primetime game with the whole band together against a rival. To me, the NBA season starts today.

The Oklahoma City Thunder come into this game with a record of 2-1, after what can only be described as a whirlwind first week. They looked good, but not great, in their opener against Utah. Then, in Minnesota, crews are still trying to pick up the mess that was left behind by the shellacking the Thunder received at the hand of the Timberwolves. And then Westbrook returned to provide a spark at home against the surprisingly resilient Phoenix Suns. The week was like the recordings of a seismograph: up and down, up and down. But alas, the Thunder came out relatively unscathed and have had a couple of days between games to practice with a full compliment of players.

The regional rivalry between the Thunder and Dallas Mavericks begins tonight in Oklahoma City. The Thunder won all 4 games against Dallas last season, and have won 10 straight games against the Mavs, to include the playoffs. While it may seem to currently be a one-sided rivalry, two of the games last season went to overtime and a third was only a 6 point victory for OKC. Regardless, when it comes to regional rivalry games, you can usually throw records out the window.

Coming into this game, the Mavericks are 3-1, and are surprisingly one of the top offenses in the league. Surprising, not because of the personnel, but because of how quickly the new parts have assimilated into an offensive force. The Mavs are still led by forward Dirk Nowitzki, who seems to be recovered from the myriad of ailments that plagued him last season. The Mavs’ reassembled backcourt seems to be what is spear-heading the offense. Shooting guard Monta Ellis has been very efficient in the first 4 games of the season, averaging 25 ppg on 53% FG shooting. The other half of the back court, Jose Calderon, has struggled mightily offensively, but has done a good job orchestrating the offense. Off the bench, the Mavs are led by veterans Vince Carter and Dejuan Blair. END_OF_DOCUMENT_TOKEN_TO_BE_REPLACED