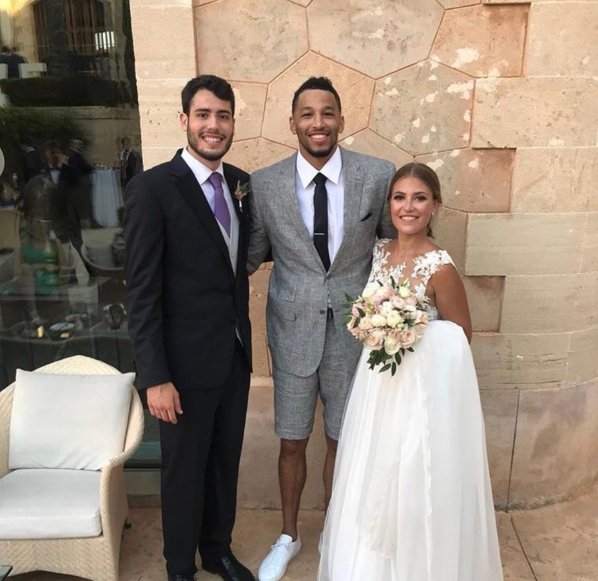 If the Oklahoma City Thunder’s summer could be encapsulated into one word, that word would be “love”. Not that smooshy, Barney-inspired “I love you, you love me” love. No. What the Thunder have shown this offseason is love that is running hand in hand with their maturing nature. This isn’t a bunch of 20-somethings planning how they are going to get laid on a Saturday night. It’s not Thunder U, anymore. The Thunder’s core is past the point where words like love, marriage, and monogamy are just reserved for the 12-year vet at the end of the bench. They are, in a word, getting older.

As fans, we sometimes view athletes as overgrown teenagers with huge allowances. Man-children looking for the next great thrill after the game. A player gets into a bar fight: Oh, that’s just boys being boys. A players ends up with 8 children from 6 different women. Welp, that’s athletes for you. We celebrate the man’s man, living the single, athlete life vicariously through our favorite ball players.

But we sometimes neglect to remember that not every athlete is like that. Many athletes are like you and I. Guys that fall head over heels over that one girl and want to stay with her. And its seems, more and more, like the players in the Thunder organization are starting to view the monogamous route as one worth pursuing.

It all started on the eve of July 1st, when Paul George professed his love for Oklahoma City in signing a 4 year, $137 million contract. I know it sounds a bit corny, but a big theme in PG’s story in Sport Illustrated after re-signing focused on his feelings towards OKC and the bond he had built with the people in the organization, namely Russell Westbrook. In the article, by Ben Golliver, Paul states, “I wanted to come back home. To play for home, to put that jersey on for family and for what I grew up watching. I wanted to carry that legacy. But I went to Oklahoma, fell in love with it and I’m happy with the decision.”

Additionally, the slower pace of Oklahoma City, often viewed as a negative in the context of attracting/keeping players, actually worked in OKC’s favor for once. In that same article, Paul George stated, “I’m a family man now. I don’t need no distractions, I don’t need no big cities, no big lights, at this point in my career. For as beautiful as Oklahoma is, it doesn’t have big lights and none of that. But that’s fine. … I’m a low-maintenance, low-key, chill guy. I’m not out in the streets, I’m not out in the club, at parties, I’m not really at movie premieres. After games, after practice, I’m home, I’m with my kids, I’m with my girl, and I’m chilling.”

Love can take on many different forms. We think of it only in the person to person sense, but as Paul George proved, his love for a city, an organization, and a brotherhood proved too strong from him to move away from where many thought he would.

Later in July, Thunder reserve guard Alex Abrines got married to his fiancé, Carla Garcia in a ceremony in Mallorca, Spain. The 25-year old had been engaged to Ms. Garcia since the summer of 2017.

In attendance at Abrines’ wedding was teammate Andre Roberson, who was joined by his girlfriend, NBA 2K host Rachel DeMita. In what may have been the most challenging offseason of Roberson’s career as he recovers from a torn patellar tendon, it has been good to see other aspects of Roberson’s life go well. There seems to be a genuine love developing between Roberson and DeMita, and if they have been drinking the water in Oklahoma City, then an engagement photo may be upcoming.

Second-year guard Terrance Ferguson appears to be accelerating what his other teammates are doing. The 20-year old announced that he and his girlfriend were expecting. Then this past week, he posted a picture that his girlfriend (with pregnant belly in tow) had said “yes” to becoming his fiancé.

Over the past two week, we’ve gotten glimpses of Nina Westbrook’s expanding baby bump as she and Russell Westbrook expect their 2nd child. The Westbrooks’ first child, Noah, just recently celebrated his first birthday in May.

In this summer of continuity for the Thunder, it’s good to see that, individually, many of the Thunder’s players seem to be enjoying a calming effect in their lives from the personal side of the ledger. Too many times, personal drama can derail, not just a player, but also the chemistry within a team. Hopefully, the Summer of Love for the Thunder can carry over into the season and bring continuity and calm to the team as they contend for a title.