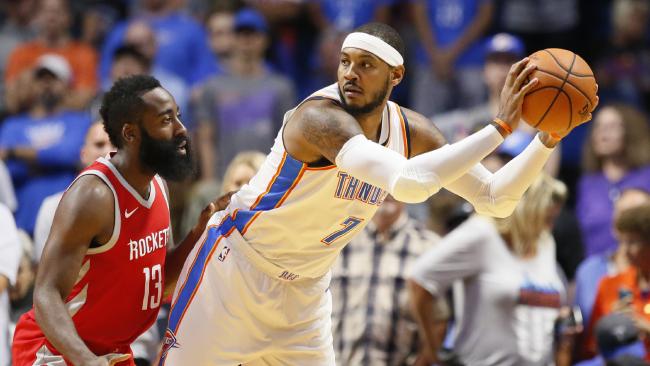 The Oklahoma City Thunder’s preseason came to a close on Tuesday with a road win over the Denver Nuggets. The Thunder finished the preseason 3-1, losing only to the Houston Rockets in their first preseason game. Also of note in that game was the fact Russell Westbrook did not play.

In the games where all the starters played, the Thunder went undefeated, ushering the era of the Thunder’s Big 3. When it comes to the preseason though, each team has a different objective for what they want to garner out of these practice games. For the Thunder, it was clear they wanted to build chemistry between Westbrook, Paul George, and Carmelo Anthony. And they wanted to see what they had in a couple of their young guys.

There’s not a lot that can be extrapolated from four games. The Thunder likely won’t win 75% of their games this season. And the Big 3 likely won’t average just 21 minutes a game. With that said, there were some takeaways I noticed from this past week. Some are positive. Others are worrisome. Here are five takeaways from this preseason.

5. Performance of the Big 3

Out of all the things I saw this preseason, this is probably the one that worries me the least. When you have a collection of stars, you need two things to make it work: first, you need the talent. That’s the entire point of having a great collective. If everyone performs to their strengths, then things usually come out well on the other side. Westbrook and George are in their primes and are two of the best overall players in the league. While Anthony is a little past his prime, I like to say he’s in a situational prime, meaning he is only being asked to do what he is great at, which is score from different places on the floor.

The second thing a collection of stars needs is the want. An all-out desire to do whatever is necessary to achieve their goals by the end of the season. Between Westbrook, George, and Anthony, the hunger to win a championship should be insatiable at this point in their careers. This want is going to be what spurs the Big 3 to put away their egos and do what needs to be done to win games.

Over the course of the four preseason games, the superstar trio for the Thunder performed well enough. Nothing really stood out other than the fact George seemed to perform better, individually, when it was just him and 4 other players on the court not named Westbrook or Anthony. While I don’t think that is an indictment on the remaining two superstars, I do think this aspect of their chemistry will be the most important thing to work out in the first few weeks of the season.

4. The inconsistencies of Jerami Grant

Jerami Grant may seem like a bit player on this team, possibly a 9th or 10th man. But it’s those spots that make the difference between a good team and a great team. Or a great team and a title-contending team. Coming into this season, Grant was viewed as a back-up 4/5, especially in small-ball lineups. Someone that could spread the floor on offense as a corner three specialist and protect the rim as a weak-side defender.

I know, I know. Small sample size. Inconsistent line-ups. Some of that time he was out there with end of the bench guys. And during those times, his game isn’t built to be a primary or secondary scorer. But if this guy is going to be a lynch-pin to possible small-ball lineups, those numbers have to improve. Along with improvement, they also have to be consistent. Here’s hoping once everything gets situated in terms of the rotation, Grant will get back to playing the type of ball he played in the playoffs last season.

For the past year, Thunder nation has been clamoring for Huestis to get time on the floor. And for that clamoring, we were rewarded with 2 games worth of playing time for Huestis last season. In that short time, though, he averaged 7 points, 4.5 boards, and 1.5 blocks on 50% shooting from deep in 15.5 minutes. As far as production for a role-player, those were great numbers. So why didn’t he get a chance after those two games? That’s the million dollar question.

Coming into this preseason, especially with the additions of George, Anthony, and Patrick Patterson, it almost felt like it was going to be business as usual with Huestis. Coming into his third season, you kind of had to wonder whether the Huestis experiment train was coming to an end in Oklahoma City. But instead, Huestis has taken this opportunity by the horns and made the most of it.

But it goes deeper than the stats. In the last two games, Huestis has played the majority of the fourth quarters in very close games. Not only has he played, he’s made game changing plays. In the Melbourne United game, he made the two game-saving blocks in the final 6 seconds. In the Denver game, with the Nuggets making a furious comeback in the fourth quarter, Huestis helped the Thunder weather the storm, scoring 5 points on 1-3 shooting from deep. There’s a possibility the Thunder go into this season and Huestis is given the same treatment. But there’s also a chance they like what they see in the preseason and give Huestis some real minutes in some real lineups.

2. The Importance of Steven Adams

After being spoiled for 2.5 seasons with a center rotation that featured the best of both sides if the court, the Thunder now find themselves with just one NBA-quality center on their roster. Steven Adams likely holds the key for how far the Thunder will go this season.

I know. On a team that features Westbrook, George, and Anthony, saying that it all may come down to Adams seems a little blasphemous. But take Adams off this team, and many parts of it start to suffer. When we think of Adams’ offense, we think of him as the rim-rocking roller in receipt of Westbrook alley-oop dimes. But his greatest strength on the offensive end for the Thunder is as a screen setter. And with so much fire-power, having not just a screen setter at the point of attack, but also a pin-down screen setter off the ball will make the Thunder’s offense that much more dynamic.

Defensively, Adams is the last line of defense at the rim. Adams was raised in a defense that featured fellow long-winged defenders in Serge Ibaka and Kevin Durant. Now, those players have been replaced by Anthony and George who aren’t as long and can’t protect the rim as well. When comes to protecting the rim, it is Adams and Adams alone (unless Grant is in the game with him). Additionally, Adams will have to concentrate more on getting good positioning in order to grab rebounds.

If Adams continues to play like he has in the preseason, the Thunder should be okay. After a scare in the first game against Houston, Adams went on to play in all four of the preseason games. In 22.5 minutes of game action, Adams averaged 8 points, 6.8 boards and 2.3 boards on nearly 62% shooting from the field.

Here are some stats from last season and how the Thunder stacked up with the rest of the league.

Now, here’s how it looks so far this preseason:

In keeping up with the rest of the league, the Thunder focused this offseason on getting players that could offset this egregious weakness. Anthony and George should help immensely in the 3-point shooting department. And if the Huestis revelation proves to be true, he could to the Thunder what Grant was for them last season.

But here’s the even bigger silver lining for the team: Patrick Patterson didn’t play in the preseason at all, and Alex Abrines only logged about 10 minutes. Those 3-point numbers are bound to go up with those two return full time to the lineup.

Another revelation from this preseason was the surprising emergence of rookie Terrance Ferguson. Many thought he would be an after-thought with the Thunder’s G-League affiliate, the Blue, this season. But he looks like he might be more on the Steven Adams/Andre Roberson development plan, instead of the Josh Huestis/Perry Jones development plan. At the same time, though, I think Ferguson will struggle this season against seasoned NBA veterans. He’s still rail thin and still has to get use to the speed of the game. I’m far more confident now that he’ll get there sooner rather than later. But I also don’t think it will happen consistently enough this season.

There you have it. One more week before everything counts. The Thunder should be one of the funner teams to watch this season. Whether that ends with them hoisting a trophy remains to be seen.