We continue the NTTB Rank with the players that I think should be on the Thunder’s 15-man roster. Because of contract situations, this is not likely how the roster will shake out. But, in a vacuum, these are the 15 best players on the roster from here on out.

While he struggles with shooting, Christon does a decent enough job of getting the offense set up for the reserves. As the season progressed last year, he showed improvement and more aggressiveness in looking for his shot.

But Christon’s bread and butter is on the defensive end. He does a good job of staying in front of his man and his long arm make him a threat in the passing lanes. He has a tenaciousness that you like to see in reserve players and a pragmatism about his place on the team.

Johnson has spent the last two seasons developing with the Thunder’s G-League affiliate, the Blue. He showed enough improvement over that time span for the Thunder to reward him with a 2-year contract this offseason.

The Thunder are already loaded at the big man position, so playing time will be sparse for the former Kentucky Wildcat. But Johnson will have the opportunity to learn a variety of skill sets from each of his fellow bigs. Although he’s a bit of a plodder, Johnson has pretty good feet and can probably learn some offensive post moves from Enes Kanter. In addition, Nick Collison and Steven Adams will be able to coach Johnson up on positional defense. Outside of that, the Thunder got themselves a good young big they can continue to develop on the cheap.

The mystery that is Josh Huestis. You put him out there in small sample sizes with the Thunder and he looks the part of an NBA player. He has athleticism. It seems like he can hit an open outside shot. He has the tool set of a possible stretch 4 in this stretch 4 happy league. So why has he only played in 7 games the last two seasons?

Outside of strategic reasons (i.e. he’s a positional tweener who’s still too weak to play the 4 and not laterally quick enough to guard the pick and roll on the perimeter), I see no reason why the Thunder haven’t given this guy an opportunity. He’s better than Kyle Singler and a lot cheaper. Even if it’s just to use him in specific situations, the Thunder should have developed him a lot more on the big league squad. 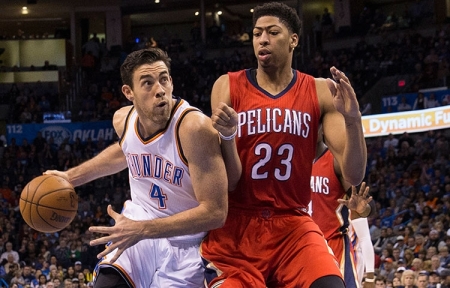 The Thunder’s most elder statesman. It was a little touch and go this offseason as to whether Collison would return for one more season. But in mid-July, the Thunder announced they reached a 1-year deal with the 14-year vet to remain on the only franchise he has ever played for.

On the court, Collison’s impact won’t be very big. He only played in 20 games last season and he’s turned a year older since then. If a team has an effective bruiser, such as Zach Randolph or LaMarcus Aldridge, Collison can still be dusted off and used for several minutes at a time.

Off the court is where his impact is felt. As he has said in the past, he still feels like he can contribute on the floor, but he’s not averse to coaching up his teammates, if need be. He’s the locker room leader and sometimes, that can be just as important as any role on the floor.