Why do people save money? There are usually two reasons why people save money. The first is to be prepared for an emergency. If the car breaks down or the air conditioner goes out, you have the funds necessary to replenish this item without digging into the budget. The second reason people usually save money is to purchase an item of great worth. Be it shoes, a house, or a boat, these are the items where patience becomes a virtue. Too many times, people head into a situation where they want to save, but end up either getting a cheaper knockoff or end up purchasing the item too quickly on credit, which leads to future budgeting issues.

The Oklahoma City Thunder have been saving for the past 6 seasons. Emergencies happen all the time in sports. These emergencies usually involves a catastrophic injury to a key player or two. Having that salary cap flexibility of not being in the luxury tax is key to recovering quickly if your main player(s) go down. But the true essence of why the Thunder have been saving money can be traced back to October 27, 2012. That was the day the Thunder avoided going into the luxury tax by trading James Harden to the Houston Rockets.

On the surface, the trade has been a disaster for the Thunder. Harden finished 2nd in the MVP voting this past season and led his team to the Western Conference Finals. The Thunder, on the other hand, have seen the last 3 seasons end in disappointment due to various injuries to key players. The players obtained in the Harden trade are known as the pennies in the saying “pennies on the dollar”. Kevin Martin was a great 6th man for one season, but signed with Minnesota the next season. Jeremy Lamb was a marginal bench player his entire Thunder career and was recently traded to the Charlotte Hornets for a 2nd round pick. Steven Adams and Mitch McGary were first round picks obtained in the trade and have been the most valuable commodities from the trade. And Alex Abrines was drafted with the 2nd round pick obtained in the trade and has yet to step foot in the United States. But the most important asset to come out of the trade was the salary cap flexibility.

To the casual NBA fan, talks of salary cap flexibility, luxury tax and repeater tax concerns, max contracts, market size, so on and so forth are the minutiae that makes the NBA offseason so boring. The casual fan only pays attention from November to June (scratch that, April to June). All they see is players, their stats, and how much they make. They don’t take into account that NBA teams have to budget and balance their checkbooks like normal people do. While its true that their budgets likely feature many more commas than ours do, the fact still remains that NBA teams have to run their organization within certain boundaries. Spend too frivolously, and your organization will likely lose money.  Don’t spend enough, and your organization is likely destined for failure. Finding the balance is the key to success in the NBA. And sometimes, in that balance, difficult decisions have to be made. 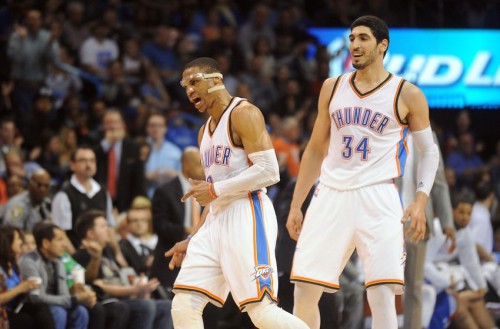 The Thunder made that difficult decision when they traded Harden. They eschewed paying the luxury tax in preparation for this moment. The harsh reality is that James Harden was never going to be James Harden if he stayed in Oklahoma City. He was a redundancy on a team that already featured two great ball handlers. He knew this and, if reports are true, made the ultimatum that he either get paid max money or get traded to a team where he could receive max money. The split between OKC and Harden was a mutual split. Both parties got what they wanted in the end. What Oklahoma City got, in addition to the players and draft picks that came over in the trade, was the comfort in knowing that they could safely go into the luxury tax when the perfect opportunity arose.

On February 19th, 2015, the Thunder traded Kendrick Perkins, Grant Jerrett, the rights to Tibor Pliess, and a future first round pick to the Utah Jazz for Enes Kanter and Steve Novak. Kanter was in his 4th season, which meant that, with the trade, the Thunder owned his Bird Rights as he headed into restricted free agency in the offseason. In the 26 games Kanter played for OKC, he was a double/double machine, averaging 18.7 points and 11.0 rebounds per game. He provided something the Thunder had never seen before since they moved to the Great Plains, an inside scoring presence. Kanter and Russell Westbrook quickly became familiar with each other in the pick and roll game. With Kevin Durant and Serge Ibaka out for much of the 2nd half of the season, Kanter stepped in as that 2nd scorer behind Westbrook. While his defense was deplorable, some of that may have been an effect of Durant and Ibaka not being there to help him out defensively.

After not reaching an agreement with the Thunder when free agency began on July 1st, Kanter decided signed a 4 year/$70 million dollar offer sheet with the Portland Trailblazers, who were one of three teams who still had the cap space to sign Kanter. Reports were the Thunder offered Kanter $15.5 million per season for 4 seasons. Kanter’s representatives instead chose to wait on the market to see if a max contract was offered, which Portland did on July 9th. The max contract features a player option for the 4th year and a trade kicker. Portland tried to add all the poison pills they could to make the contract as unattractive as possible for the Thunder.

So here’s where the Thunder stand. They have until midnight tonight to match Portland’s offer sheet. This is what all the saving was for. The Thunder sacrificed a lot in the past to be in the position they are today. The beautiful thing about it is that they still have options. If they feel Kanter is not worth this contract, they can walk away from the table, and the Thunder would still be one of the top teams in the league, health permitting. But, if they feel Kanter is the final piece to their championship puzzle, they will gladly match the offer sheet with a smile on their face, knowing full well this was the moment they were waiting for.

1 thought on “D-Day: Decision Day for the Oklahoma City Thunder and Enes Kanter”