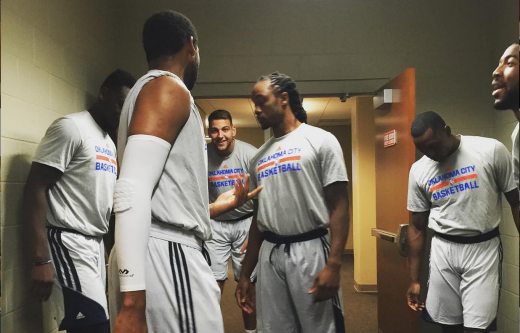 Summer league games are, in essence, exercises in hope. If you’ve watched summer league long enough, you know 80-90% of the guys on the court won’t ever make it to the NBA. If your name was not called in the first round, your chances of making it to the bigs drop significantly. With all that said, though, we still watch. If you are a true fan, you become familiar with all the players on the roster and even start to pick up little tidbits about them. A week later, unfortunately, all that knowledge gets cycled into the memory dump of our brains, and most of those players become but a distant memory. But as you watch the games, you start to notice things about players that may actually help your NBA roster.

After one game, the Oklahoma City Thunder sit at 1-0, having defeated the Charlotte Hornets 76-74. Lacking a dearth of NBA experience, the Thunder summer league roster depended on defense for key stretches in the game and on their back-court duo of Semaj Christon and Frank Gaines, who combined for 31 points. Christon notched a double-double with 14 points and 10 assists, while also hitting the deciding basket on a drive on the Thunder’s final possession. Mitch McGary and Dakari Johnson cleaned up well around the basket, each grabbing double digit rebound totals (24 rebounds total between the two). The spark off the bench came from Travis Bader who came into the game in the 2nd quarter, and quickly racked up 10 points on 2 3-point shots, a mid-range jumper, and 2 free throws. Defensively, McGary struggled a bit with Hornets’ rookie Frank Kaminsky, losing him several times on the pick and roll. Kaminsky finished with 19 points and 12 rebounds to lead the Hornets, but did not score in the 4th quarter.

Orlando brings two teams into their summer league. Their White team is made up mostly of guys that will likely spend most of their time next season in the Developmental League and overseas. The Blue team on the other hand, is made up of all the first and second year players that will likely see significant minutes in the NBA this season. This is an extremely smart move by the Magic who would like to see their young guys play together to develop a rhythm, instead of having them mixed with players who, honestly, likely will never sniff an NBA court. The Blue team won its first game against the Los Angeles Clippers, 75-74, in overtime. The Blue team is led by point guard Elfrid Payton, who was first team All-Rookie last season. Joining him on the wing are Magic first round pick Mario Hezonja and second year player Devyn Marble. Hezonja hit the deciding 3-point shot in overtime in the Blue team’s first summer league game. Up front, Aaron Gordon and Brandon Davies all have NBA experience. Off the bench, the Magic (Blue team) will likely use their 2nd round pick Tyler Harvey as an offensive spark plug.

Three Keys in the Game

1. Experience – The bulk of the minutes doled out to players on the Magic team will be to those players with NBA experience. While the Thunder don’t have the same amount of NBA experience, they do have a team that is quite familiar with itself as most of the Thunder’s roster is composed of players who were on the Thunder development team, the Blue. 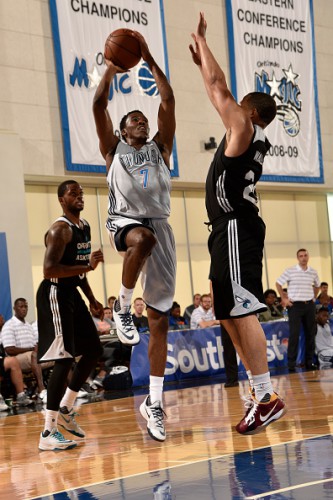 2. Summer league superstar match-ups – While there aren’t necessarily any superstars in summer league, there are some interesting match-ups in this game. Aaron Gordon and Mitch McGary will likely match up a lot in this game. Both are athletic forwards that have a year’s worth of NBA experience under their belt. The other interesting match-up will be Elfrid Payton against Semaj Christon. The Thunder love Christon’s game and this will be a good barometer as to how ready he is to play in the NBA.

3. Mario Hezonja – Aside from the Thunder players, I’m most excited to see Super Mario. He was okay in his first game, but when the spotlight shined the brightest in the closing seconds of overtime, he hit the dagger three. This guy is far from a finished product, but his confidence and swagger make him a must-watch in summer league action.