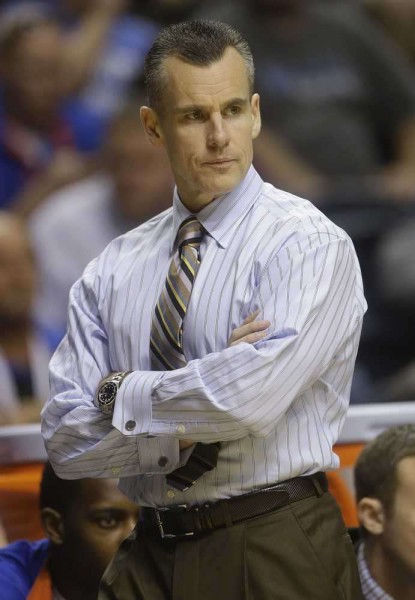 Per league sources, the Oklahoma City Thunder have hired Billy Donovan from the University of Florida to be their new head coach. The team and Donovan agreed to a 5 year contract, with the terms yet to be disclosed. The hiring comes after the Thunder parted ways with long-time head coach Scott Brooks after the season.

Donovan coached at the University of Florida for 19 seasons, garnering two national championships (2006, 2007), four SEC titles, and three SEC Coach of the Year awards. With an impressive NBA player tree that includes names like Joakim Noah, Al Horford, Chandler Parsons, Mike Miller, and Bradley Beal, Donovan’s ability to coach NBA-ready players is second only to Mike Krzyzewski and John Calipari. His coaching tree is starting to pick up steam, as young coaches like Shaka Smart, Donnie Jones, and Anthony Grant, who were previous assistants at Florida under Donovan, start to leave their marks in college basketball.

Donovan’s system is tailor made for the NBA. His pick and roll-heavy offense plays for the Thunder’s personnel. And the addition of Enes Kanter as an interior scorer should make this offense that much more dynamic. His defensive approach will also play well into the Thunder scheme of pressuring the ball and defending the paint. The Thunder will have more chances to transform defense into offense under Donovan’s coaching. Donovan is known for his great rapport with his players, but also for holding them accountable for their actions on the court. That’s one area where he and Scott Brooks will likely differ. Donovan’s system has slowly been making its way to Oklahoma City, as the Thunder’s D-League affiliate, the Oklahoma City Blue, have a head coach (Mark Daigneault) that used to be an assistant under Donovan. In addition, the Thunder’s basketball information analyst, Oliver Winterbone, is a former video coordinator under Donovan, and likely helps out in the advanced metrics department.

Donovan comes into a situation many will deem as a dream and a possible nightmare. While the first job of many head coaches usually involves a struggling, rebuilding team, Donovan has been gifted with two of the best players in the world. The Thunder will enter next season with championship aspirations, as they have the last four seasons. But with Kevin Durant’s impending free agency in 2016, every misstep will reverberate even louder than it normally does. For a coach that has never coached in an NBA game, it will be tantamount that he know how to handle that pressure. Golden State’s Steve Kerr and Cleveland’s David Blatt faced similar pressures as first year head coaches heading into this season, and both have been successful. On the other hand, Derek Fisher has had a disastrous first season with the New York Knicks.

While its been reported that Thunder GM Sam Presti has not directly involved Durant or Russell Westbrook in the coaching search, that doesn’t mean the players have not done their homework. Durant stated that he spoke with several former Gator players and is, “generally positive” about the Thunder’s hiring of Donovan. While many will view this response as questionable (why wasn’t he fully positive about it?), one has to also take into account the loyalty Durant has for Brooks. A full endorsement would almost be like a disparaging comment against Brooks. Like any new relationship, this will take time. But I think this will work out fine. Presti has been scouting Donovan for years, and conversely, Donovan has likely been watching the progress of the Thunder from afar these last few seasons. This was not a decision made in haste. In fact, this was likely a decision that has been years in the making.