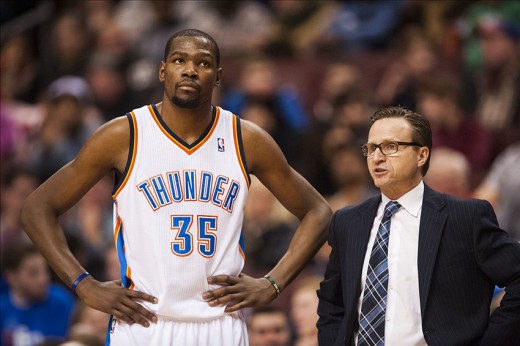 The Oklahoma City Thunder have parted ways with head coach Scott Brooks after an injury riddled 45-37 season that saw them miss the playoffs for the first time in the last five seasons. It was nearly a week ago, during exit interviews, that the organization advised they would evaluate the head coaching position as they headed into the offseason. To that, Scott Brooks remarked, “I expect to be the coach next season,” when asked about it during his exit interview.

Scott Brooks took over as head coach for the Thunder one month into their inaugural season in Oklahoma City. At that point, the Thunder were 1-12 and looking like a team that may threaten the Philadelphia 76ers mark for futility in a season. With Brooks at the helm, the Thunder rebounded enough to salvage a 23-win season. The year after that, the upstart Thunder won 50 games and made the playoffs as an 8th seed and took the eventual NBA champion Los Angeles Lakers to 6 games. Brooks was awarded the NBA Coach of the Year after that season. The next season, he took the Thunder to the Western Conference Finals, where they lost to eventual champions, the Dallas Mavericks. The next season, Brooks led the Thunder to the NBA Finals, where they lost in 5 games to the Miami Heat. The next years ended in disappointment as key players were lost to injury in the playoffs (Russell  Westbrook in 2013 and Serge Ibaka in 2014). This season, which started with championship aspirations, soon devolved into a struggle as the Thunder suffered injury after injury to key players, which saw Westbrook miss the first month with a broken hand, reigning MVP Kevin Durant play in only 27 games due to a broken foot, and Ibaka miss the last month of the season after knee surgery. The Thunder never gained any traction during the season, and eventually missed out on the playoffs to the New Orleans Pelicans in the final day of the season. Brooks finishes his tenure in Oklahoma City with a 338-207 (.620) record.

According to Adrian Wojnarowski of Yahoo Sports, Thunder GM Sam Presti’s decision wasn’t a reflection of the job Brooks did this season, but more a long-term view for the franchise. While this may go down as a firing, a couple other teams have hinted at their interest for Brooks. The Orlando Magic and Denver Nuggets are both rebuilding teams that are looking for a coach that has already been through and succeeded in that process.

The question now becomes, who’s the next Thunder head coach. Rumors are abound that University of Florida head coach Billy Donovan and UCONN head coach Kevin Ollie may be candidates for the opening. Both coaches have history with the Thunder. Two former Donovan assistants have been hired by the Thunder in the past few seasons, one of which is their current D-League coach, Mark Daigneault. Ollie, on the other hand, played for the Thunder in the 2009-10 season, and is credited by Durant, as being the person that established the current culture in Oklahoma City. Both have a championship pedigree, as Donovan has won 2 NCAA championships and Ollie has won one. Another candidate may be Iowa State head coach Fred Hoiberg, who has been successful in college, but also has front office experience with the Timberwolves in the past. Other candidates may be embattled Chicago Bulls coach Tom Thibodeau or Golden State Warriors assistant coach Alvin Gentry.

This next season may be a make or break season for the Thunder, as Durant approaches unrestricted free agency in 2016. Hire the wrong guy, and the organization can seal the deal on Durant not coming back. While Brooks may have had his faults, he always had the support of his superstars, and NBA, that carries a lot of weight.