It’s that time of year again. Time to look back on the year that was and look forward to the year that will be. As people look towards the year that will be, they look at ways to improve upon themselves. Whether it’s losing weight, eating healthier, committing more time to family, etc, it’s a time for reflection and introspection. It’s similar to when the season ends for sports team and the front office and coaches (if they don’t get fired) focus on what they need to do to get better.

As the Oklahoma City Thunder turn the page on 2014 (of the 2014-15 season), they will head into the New Year with a losing record for the first time since their inagural season in 2008-09. Yeah, the 3-29 season. Now, are there reasons (excuses) for the Thunder’s current state of affairs? Of course. Injuries to key players, line-up inconsistencies due to the injuries, tough schedule/conference, so on and so forth. But those are all external factors. For the most part, you can’t help those. Internally, though, there are some New Year’s Resolutions that can occur to make the Thunder better for the second half of the season.

In case you haven’t noticed, Russell Westbrook has this new thing when he goes to the free throw line this season. When he receives the ball, he holds it on his left hip with his left hand. Then he raises his right hand towards his chest, like he’s about to do The Pledge of Alligience. As he raises the right hand, he inhales deeply. After about a second, he exhales profoundly, takes a couple dribbles, and shoots his free throw. I don’t know what this does for him or why he started doing it. The change in his free percentage has been infinitesimal when compared to his career average. So why do it? 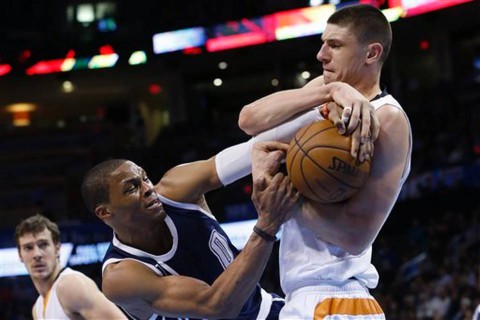 Just for a minute think about the way Westbrook plays. It’s go, go, and GO! There is no slow down to Westbrook’s game. It’s what makes him successful and a terror to opposing defenses. It’s also what makes him turnover prone and questionable when it comes to shot selection. So it would only make sense, when he has to slow down (i.e. free throws), he would take some time to focus through breath control. It like Yao Fei on Arrow teaching Oliver Queen how to shoot arrows.

Westbrook would be wise to apply that same concept to end of game situations. For the first 43 minutes of games, Westbrook plays like the best point guard (and sometimes, the best player) on the planet. But in those final 5 minutes of close games, Westbrook can run the gamut on how he plays. He can pick apart a defense, like he did against San Antonio on Christmas day, and execute perfectly in end of game situations. Or he can completely unravel (bad shots, turnovers, questionable decisions on defense) as seen in the following recent examples:

It’s these times where Westbrook would be best to close his eyes, inhale deeply, focus, and then exhale profoundly. A lot of the late game problems have to do with Kevin Durant not being available. But a lot of it is a result of Westbrook’s demons rearing their heads when the lights are the brightest. The return of Durant should quell some of these issues. But if they ever do threaten to arise again, close your eyes and listen:

“Breathe, Russell. FOCUS. And release. Now go out there and do what you do best.”

For your New Year’s resolution, learn how to play basketball in high tops. The KD shoe line is very aesthetically pleasing. But lows on basketball courts have always bothered me. I don’t care what the studies say or what 4 out of 5 doctors recommend. In a game where that much stress and torque is placed on the ankles, having an exterior support system should be helpful in preventing injuries.

Are ankle injuries a part of basketball? Of course. But seeing how injuries have become a common theme in the story of the Thunder’s last few seasons, anything that can alleviate what we are seeing this season would help. I’m down for whatever:

In the end, just don’t get injured anymore. 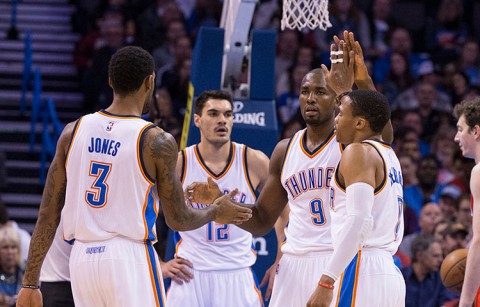 For three seasons now, Thunder fans have wondered, “What would happen if Perry Jones actually tried his hardest out there?” And it honestly has nothing to do with effort. Perry Jones has never struck as a lazy player. But he has struck me as a guy that is happy just being out there. When Durant, Westbrook, and Reggie Jackson were out at the beginning of the season, we finally got to see what Jones could do. In 3 games before he, himself, suffered a knee contusion which sidelined him for a month, Jones averaged 22.7 points, 5 rebounds, and 2 assists on 52.2% shooting from the field (which included 41.2% from 3-point territory).

The think was that once Jones got back, he would be an integral part of the bench and would be an offensive aggressor with the reserve unit. Instead, the Thunder got more of Jones floating around the perimeter and never forcing the issue. When Durant went out with the sprained ankle, Jones was tabbed as the starting SF in his absence. In that first game as a starter, Jones put up a dud, going scoreless on 0-2 shooting in 12 minutes. After the game, Coach Scott Brooks implored Jones to be more aggressive. After three seasons in the league, your coach shouldn’t have to implore you to be more aggressive. It’s a league of do-ers.  If you ain’t doing, you won’t be employed for long.

Since Brooks’ plea, Jones has been a lot more aggressive in looking for his own shot. He’s averaging 8.3 points and 2.7 rebounds on 48.8% shooting from the field. Not necessarily what he was putting up in that great 3 game span, but probably the most consistent 6-game effort in his career. Jones adds a dynamic to the bench that we’ve never had: a match-up nightmare. He’s too big for most wings and too fast for most post players. And I think he’s starting to realize that he is a match-up nightmare. Embrace this thought Perry, and be what we always wanted you to be.

The Thunder always had a big problem when they started games the last few seasons. It was almost like they started the game 3 on 5 on the offensive end. It was not strange for the Thunder to start games in a deficit because of the offensive inefficiencies of Kendrick Perkins and Thabo Sefolosha. The supposed plus those two players gave on the defensive end was usually overshadowed by a bigger minus on the offensive end. With that information in tow, the Thunder moved towards a younger, more dynamic starting line-up. Out were Perkins and Sefolosha, and in were Adams and Roberson.

When the Thunder have been healthy this season, the starting line-up of Westbrook-Roberson-Durant-Ibaka-Adams has been one of the top starting 5’s in the league. Roberson is already on par, if not better, than Sefolosha defensively and Adams has steadily improved on both ends of the court as the season has progressed. While Roberson is still a work in progress on the offensive end, the major difference offensively has been that Adams, when given the opportunity, can do things that Perkins just couldn’t do consistently (namely catch the ball and score over people). With every passing game, each of these young players gains more and more confidence in their abilities and in their place within the starting 5. 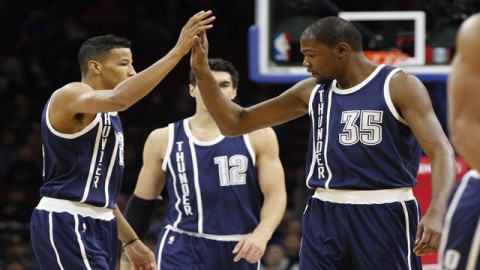 The only issue, other than Roberson’s inconsistencies on the perimeter, has been the free throw shooting of the two second year players. Adams is currently shooting 52.6% from the free throw line on nearly 3 FT attempts per game. Roberson is shooting 50% on 1.4 FT attempts per game. While those FT attempt numbers may not seem that significantly, they are over 50% more than what both players attempted last season. Meaning that as their playing time has increased, so has their propensity in getting the to charity stripe. When you have players like Durant, Westbrook, and Reggie Jackson setting you up, you’re bound to get some looks that will cause the defense to foul you.

The free throw shooting has been so inconsistent that some teams have elected to use the Hack-an-Adams or Hack-a-Roberson technique at some points throughout the season. As this season progresses, teams may employ that more often, which may cause the Thunder to either sit those players in critical situations or roll the dice with their free throw shooting.

Please try your hardest to stay healthy the rest of the season. Nothing is more important to the Thunder’s title hope than the health of their two superstars. It doesn’t matter what seed the Thunder are or who the draw is. If the Thunder have both Westbrook and Durant healthy come the middle of April through (hopefully) the middle of June, the Thunder will have a chance.