One of my favorite Jay-Z songs from early in his career was “A Week Ago”. The basic premise of the song deals with the chronology of living a drug dealer’s life and how things can change in the span of a week. One minutes things are going good; the next, you’re left wondering how things could have gotten so screwed up when it was all good just a week ago.

Rewind back to May 22nd.  The San Antonio Spurs were coming off another blowout victory over the Oklahoma City Thunder, held a 2-0 lead in the series, and were looking completely unstoppable. The Thunder were thought to be the worst match-up possible for the Spurs. A team that had beaten the Spurs 10 out of the last 12 times they had played, to include the 2012 Western Conference Finals. But the Thunder were without their best defensive player and without one of the main components of their offense in Serge Ibaka. A lot like the Russell Westbrook injury from last season, the Thunder were not very familiar with life without their athletic power forward. In the past 4 seasons, Ibaka has only missed 3 games total, none in the playoffs. As is  the case with most other changes, there was an adjustment period to get used to. And it showed in the first two games of the series.

The Thunder were unathletic and slow. They couldn’t defend the paint, and when they overcompensated, they were punished from the 3-point line. The Spurs averaged a blistering 60 points in the paint in those first 2 games and made 9 threes in each of those games. The Thunder offense was unimaginative and stagnant. Without the release valve that is Ibaka, the offense was left in the hands of Kevin Durant and Westbrook (and Reggie Jackson, but his production can be inconsistent at times). While great, those 3 players aren’t enough, especially for a great defensive unit that is keying in on them. And so, the media was already writing out the Thunder’s obituary on the 2013-14 NBA season: A great season that was marred by injuries at the wrong times. 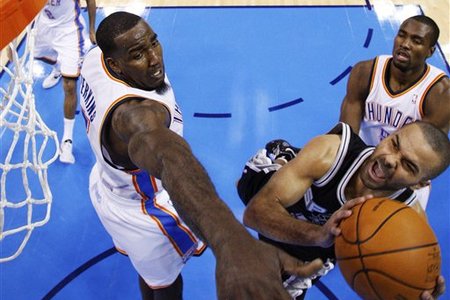 But then came word that Ibaka’s calf was responding to treatment a lot better than expected. The swelling had subsided to the point where the team changed his status from OUT to DTD (day to day). His only obstacle would be his ability to play through the pain. If you know Ibaka’s story, you know that physical pain is the least of his worries. The question was never whether Ibaka would play. With little to no risk of compounding the injury, the only worry was in reinjury. And with an entire offseason ahead, Ibaka could easily rehab a strained calf muscle during the summer. The question was how effective would he be. Would he be the dominant defensive player that we’ve all come to know in the past 4 seasons or would he be a shell of himself?

That question was answered emphatically in the first three minutes of Game 3, in which Ibaka had 6 points on 3-3 shooting, 1 rebound, and 1 block. Even though he limped noticeably at times during the game, an Ibaka at 80% is a whole lot better than no Ibaka at all. The Thunder took control of the game in the 2nd quarter and kept the Spurs at bay the rest of the game. The end result was a 106-97 victory for the Thunder and a proverbial pendulum that had possibly reached it’s maximum height.

After that Game 3 victory, the same media members who were writing the Thunder off just days before, started to feign the other way. Could the Thunder repeat what they had accomplished in the 2012 Western Conference Finals? If you remember, the Spurs also held the home court advantage in that series and went up 2-0. Of course, those first two game were a lot more competitive than the first two games this year. But the results were still the same: San Antonio leads 2-0. The series switched over to OKC and the Thunder won their two at home. Tie series. The Thunder then won a close one in Game 5 in San Antonio and closed the series out in 6. Gentleman’s sweep. Could it happen again? 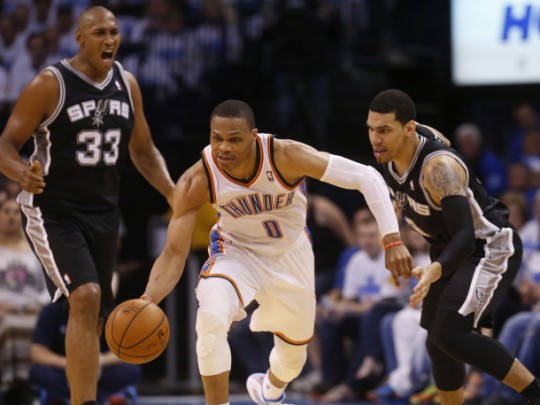 If anything, Game 4 was the biggest game of the series for the Spurs. Win that one and you not only kill any of the momentum built by the Thunder from Game 3, but you also kill any of the ghosts from the 2012 series. Lose Game 4, and the Spurs all the sudden turn into the speeding driver looking in his rear view mirror after he passes a police officer. The Spurs looked like they were all business, opening up Game 4 on an 8-0 run. From there, the Thunder went on to outscore the Spurs 58-35 in the first two quarters and the rest of the game was but a mere formality.

Pendulum completely in full swing the opposite direction and the Spurs nervously looking in the rear view mirror. It was all just a week ago. But that has been the theme these entire playoffs. Every game has been a narrative in and of itself. And Game 5 will be no different. Can the Spurs recover mentally from the PTSD-like nightmare that may be haunting them? What is Reggie Jackson’s condition and will he be effective? So many questions that will be answered on Thursday. Pendulums could swing again and rear view mirrors may become obsolete after tonight.