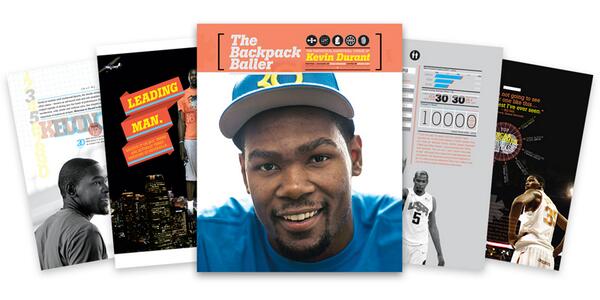 If you follow my site any, you know that I don’t ever push any products and I don’t advertise. Part of that has to do with the fact that Word Press won’t allow you to place ads in your blog. But I also don’t advertise because I don’t want to. This is purely a labor of love for me. I do it for free and I do it because it is a hobby of mine to write about my team. While I don’t advertise on my site, I wouldn’t be opposed to supporting something that I feel is worthwhile, though.

Recently, I received an email from Brad Graham regarding a project he was working on. The project is a 250 page book chronicling the rise of Kevin Durant.

Here’s Brad summary of the book:

The Backpack Baller: The Fantastical Basketball Voyage of Kevin Durant will be a 250 page magnum opus taking a forensic and satellite view of KD’s on-court conquests, as well as his off-court challenges.

The book will explore his devotion, brilliance, and cultural standing, and much like the player on which it’s based, The Backpack Baller is non-traditional. Neatly broken up into a series of essays, magazine-style features, and interviews with Durant himself, the book will cover everything KD has touched over his first 25 years.

During the early stages of research, the book’s author, Brad Graham, planned to write a sprawling 5000 word magazine article, but after conversing with a collection of renowned reporters, international fans, Durant’s childhood friends who now play pro, his teammates, competitors, retired greats of the gam, and of course, the man himself, Brad realized there was more than enough content to craft a compelling book – and with his background in graphic design, he was just the man to take on such an ambitious project.

Now, I’m skeptical by nature, especially when it comes to receiving something via email. But the more I read into the project, the more I wanted to find out whether this was something legit. So I emailed Brad back and asked him about the project, and more specifically, whether Durant, himself, knew about the book. This was his response: END_OF_DOCUMENT_TOKEN_TO_BE_REPLACED