Everything was a go. There may have been a missed game here or there to begin the season, but everything was set for Russell Westbrook to return from his torn meniscus. According to anyone from the Thunder organization who dared to speak, Westbrook was on schedule with his rehab and was starting to mix in some practice time with the team.

But then the news dropped on October 1st, that Westbrook would be needing arthroscopic knee surgery and would be out another 8-10 weeks (a.k.a. the first 4-6 weeks of the season). He had recently been suffering swelling in the knee and the team decided to find the source of the inflammation. It turns out that the meniscus had healed properly, but one of the stitches that was holding the meniscus in place had gotten loose and was bothering the joint to the point of inflammation. If that is truly the case, then that is a bit of good news shrouded in the midst of bad news.

As the saying goes, “when life gives you lemons, attack Patrick Beverly.” What? That’s NOT how the saying goes? Oh, okay. Oh, yeah, I remember now. When life gives you lemons, make some lemonade. Would you rather have Westbrook in uniform or on the bench in street clothes? Of course you’d want him on the floor. But considering the circumstances, this may be a blessing in disguise. Here are a few ways, as hard as it may be to imagine them now, that this latest setback could be beneficial for the Thunder come playoff time.

From all accounts, Westbrook’s meniscus healed properly and he was on schedule to return before the inflammation occurred. But, there was still the possibility that he would miss some time in the beginning of the season. It’s better that this occurred now, and not in the middle of the season. I would rather the team treat the first half of the season as an extended training camp (assimilating Russell, acclimating the rookies and the young guys, and setting up a consistent rotation) than to have a hiccup happen in February that completely throws the chemistry of the team off heading into the playoffs.

Jackson showed last season what he is capable of. When Westbrook went out with his initial injury in the playoffs, Jackson plugged into the starting lineup almost seamlessly. If he was learning on the fly, he was, indeed, an apt student. In the 9 games that he started in the playoffs, Jackson posted per game averages of 15.3 points, 3.7 assists, 5.3 rebounds, and only 2 turnovers on 47.2% FG shooting and 89.7% FT shooting. And most of it was done against the Memphis Grizzlies, the best defensive team in the league.

Another component that became apparent was that Jackson was not scared of the moment. On several occasions he had to either ice a game or aid in a comeback from the free throw line. He was nearly perfect from the line in those situations. The stat line Jackson put up is very comparable to the stats Westbrook put up in his first 2 seasons. Jackson’s assists should increase with more familiarity and his shot selection should get better.

3. More PT for the rookies and young players.

With Jackson sliding over into the starting position, there will be a domino effect regarding playing time for some of the other young players. Jeremy Lamb was going to have a prominent role as a wing scorer off the bench anyways, but now he may have to actually lead the second team for the first 4-6 weeks of the season. The defensive maven off the bench, a position that used to go to DeAndre Liggins, now slides over to Andre Roberson. It even gives some time for training camp hopefuls Diante Garrett and Rodney McGruder.

And the great unknown, is how Perry Jones III fits into all of this. With Nick Collison aging and the team stacked at center, Jones may get a lot of time this preseason as a backup PF. All this lends itself to more development for the young guys which was severely lacking last season. The young guys got plenty of burn in Tulsa, but never got to consistently see the NBA hardwood. And when they did, it was mostly at the end of blowouts against the other team’s young developmental players. That lack of experience proved detrimental when Westbrook went down, and the bench depth on the team was exposed as being a house of cards.

4. Ample practice time for the coaches to come up with a different offensive scheme.

When Westbrook went down last season it was in the middle of a playoff series, which is possibly the worst time to try introducing anything new into practice. Luckily, the Thunder didn’t have to adjust too much as Jackson plays a lot like Westbrook in many respects. But with training camp and at least the first month of the season at their disposal, Brooks and his coaching staff should have ample time to establish an offense system that tailors to the strengths of Jackson.

Don’t get me wrong, though. The Thunder offense is a well-oiled machine that ranked at the top of offensive efficiency last season. But it’s an offense that is way too dependent on only two guys. When one of those guys goes out, either to the bench for rest or because of injury, the offense struggles to create points to keep up with the opponent. Tweaking the system to make it more of a team-oriented attack will prove to be very fruitful come playoff time. 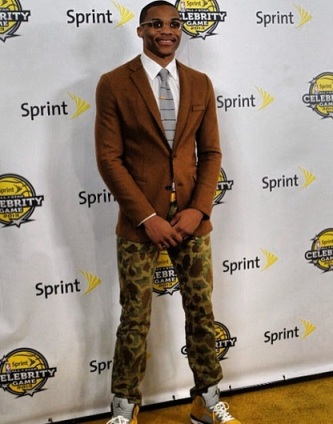 The last time we saw Westbrook, he was in a box suite with his leg in an aircast, wearing the same shirt the team gives to the fans. It was awesome to see him participating in the fan T-shirt wearing tradition that we’ve become so accustomed to doing during the playoffs. But, we’ve never gotten to see Westbrook’s sideline fashion game. Will he keep it toned down or will he try to out-do Craig Sager every night? Will he wear different color glassless lenses every night? Will he wear a suit on top and capri Hammer pants on the bottom? It’s the emergence of Sasha Fierce, and it should be something incredible to behold.

In recent interview, Kevin Durant said that he only wanted three things: an NBA title, a Finals MVP, and a regular season MVP. If Durant continues the torrid play he exhibited in the playoffs when Westbrook went down, he should be a lock to get his first MVP. In the 9 games Westbrook missed, Durant averaged 31.8 points, 9.9 boards, and 6.2 assists while still shooting 46.1% from the field.

I don’t necessarily expect those types of numbers, as Durant will be in a consistent regular season rotation pattern, and not the “YOLO, play all 48 minutes hard” rotation pattern of the playoffs. But he will still have to shoulder most of the scoring load and will have to learn to trust his teammates more.

That may actually be the key to his MVP campaign. He started to improve on this last season as he averaged a career high in assists (4.6). But scorers are scorers. Durant can score 25 points in his sleep. But as we saw in the playoffs, that load started to wear on Durant as he tired in the final two games of the Memphis series, shooting 15-48 on FG attempts. Durant has always tried to make the right basketball play, but scorers are selfish by nature. They know they have a higher chance of getting the ball in the basket than do those around them. If Durant is able to involve his teammates even more this season, then that trust in them may enhance their confidence (Serge Ibaka, Thabo Sefolosha, Jeremy Lamb) which may translate to better playoff performances.

It’s a shame that Westbrook has to sit out longer than previously thought. But the experience of missing him in the playoffs, when the stakes are win or go home, didn’t lend itself to development. With him missing the first part of the season, this may be an instrumental learning tool that may help the team in all facets of the game come playoff time.