With Oklahoma City’s 84-88 loss to the Memphis Grizzles in Game 5 of the Western Conference Semi-finals, the Thunder find themselves in an unfamiliar place: out of the playoffs before the conference finals even begin. As everyone knows, the major cause of that early exit was the season ending knee injury to Russell Westbrook in Game 2 of the Thunder’s first round match up against the Houston Rockets. After dispatching those pesky Rockets in 6 games, The Thunder found themselves matched up against one of the best defensive teams in the league. Though every game was close, the Thunder eventually succumbed due to late game execution issues and an inability to find a consistent secondary scorer to pair with Kevin Durant.

Whenever a season ends, be it in mid-April at the conclusion of the regular season or mid-June at the conclusion of the NBA Finals, every team holds exit interviews with each player and coach on their team. Exit interviews serve two purposes: either to tell the person what to work on for the next season or to advise the person of their intentions in regards to extensions or standing on the team. With the Thunder’s ouster, it’s time to hold exit interviews with certain people on the team. 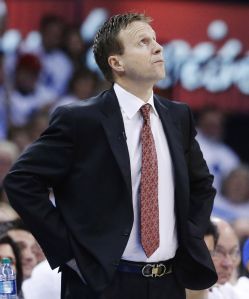 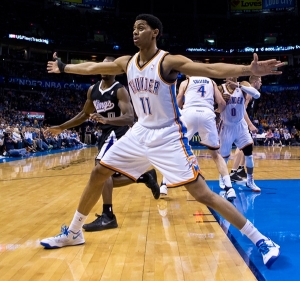 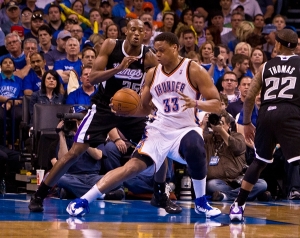 Even though the playoff exit was a lot sooner than most of us expected, the future is indeed bright for this team. Take away the reckless dive at Westbrook’s knee by Patrick Beverly, and this team is likely playing against the San Antonio Spurs in the Western Conference Finals. But, as they say, injuries are a part of the game. It’s a sentiment that could probably be echoed in Oakland (David Lee), Los Angeles (Kobe Bryant), and Chicago (Derrick Rose, Luol Deng, Kirk Heinrich, etc). Thankfully, Westbrook’s injury isn’t one that should affect him in the future. With the assets obtained in the Harden trade, it will be up to Thunder GM Sam Presti to make use of the toys he has to work with.