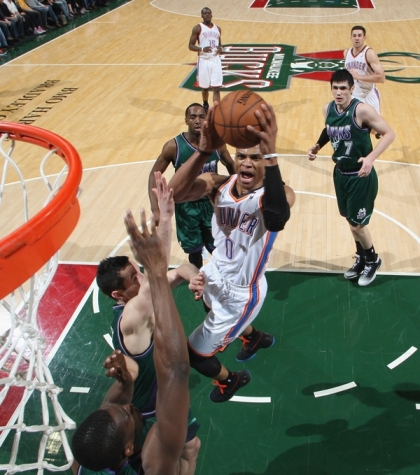 The final regular season mission has been completed. While we didn’t obtain home court advantage throughout the playoffs, we did earn home court advantage throughout the Western Conference playoffs. This accomplishment has earned us the right to treat the final regular season game like a preseason game. Limited minutes for the regulars and heavy minutes for the young guys at the end of the bench.

Other than a feather in the cap, the Milwaukee Buck have nothing to gain by winning this game, either. I wouldn’t be surprised if their regulars got plenty of rest also. The game may turn into something similar to a D-League All-Star game with all the young guys out there. Reggie Jackson, Jeremy Lamb, Perry Jones III, Daniel Orton, and DeAndre Liggins may give a glimpse to what the Thunder bench may look like next season. The Thunder won the last meeting against the Bucks using a 19-2 run in the 4th quarter to erase a 5 point deficit. 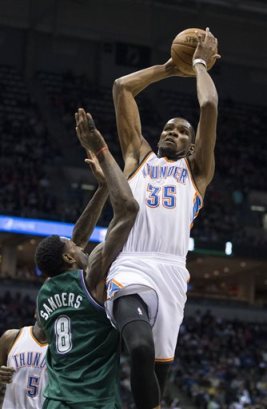 Fun note: If Carmelo Anthony sits out the New York Knicks’ final game as expected, Kevin Durant would need to score 70 points to win the scoring title. While this type of selfishness is not indicative of Durant’s character and team first approach, this wouldn’t be the first time that a guy of Durant’s moral ilk goes all Finding Nemo seagulls (Mine!Mine!Mine!) on an opponent to win a scoring title. Hall of Famer David Robinson of the San Antonio Spurs scored 71 points on the final day of the 1993-94 season to capture the scoring title from Shaquille O’Neal. 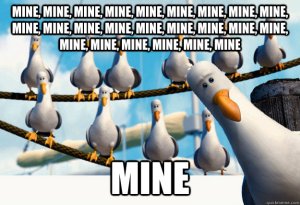 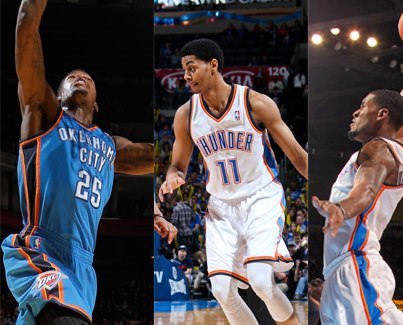 2. Preview of next season’s bench mob – There should be plenty of time to go around for the Thunder’s D-League All-Stars. Jeremy Lamb, Perry Jones III, Reggie Jackson, DeAndre Liggins, and Daniel Orton should all get substantial minutes in this game. I fully expect a poster dunk from Jones III in this game. 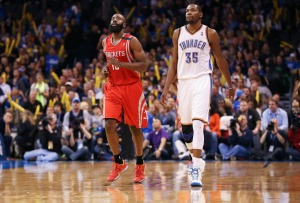 3. Appreciate this regular season – This has been one of the most trying, but also, one of the most rewarding seasons in the Thunder’s history. To lose one of your main components in a core-shattering trade 4 days before the first game of the season had to weigh heavily on the returning group of players who were itching to get back to the NBA Finals for redemption. But they adapted, learned, and improved to the point where they had their best regular season since they became the Thunder, and got the No. 1 seed in the Western Conference, to boot. Thunder Up, indeed!