This past week, Russell Westbrook signed with Jordan Brand, after being with Nike for the first 4 years of his career. While Westbrook has carved out his own following of fans, he’s always been known as Kevin Durant’s sidekick. The Robin to Durant’s Batman. This generation’s ultimate second banana. There hasn’t been a sidekick this good since Scottie Pippen. But, Pippen never received the boost in popularity that Westbrook is about to receive.

What qualifies for a sidekick? A sidekick has to be a rookie or a very young player that is brought in after the primary player is established to specifically fill the needs the team is missing. Another qualification is that the pairing has to be together for 5+ seasons. For example, Scottie Pippen was obtained by the Chicago Bulls in a draft day deal, while already having an established superstar in Michael Jordan. Russell Westbrook was drafted by the Seattle Supersonics (Oklahoma City Thunder) after they already had an established young star in Kevin Durant. Anfernee Hardaway almost made it to great sidekick status, but injuries and Shaquille O’Neal’s departure to the Los Angeles Lakers negated that possibility. The Lebron James/Dwayne Wade/Chris Bosh mash-up wouldn’t qualify as sidekicks because they were all alpha males on their respective teams before they joined forces. Kobe Bryant and the aforementioned O’Neal made a great duo, but they were brought onto the Lakers the same year and often quibbled over who was the alpha male. 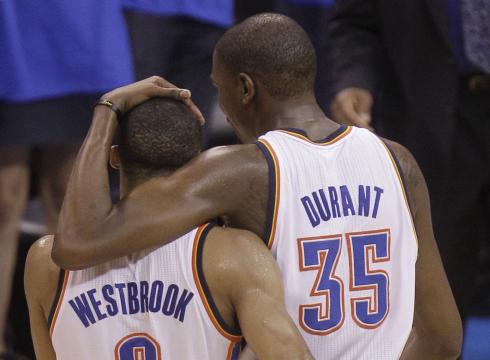 To understand the road Westbrook is on, it is important to see what happened to Pippen throughout his career. When Pippen first started college at the University of Central Arkansas, he was a 6’1” walk-on that needed to moonlight as the team’s manager to pay his tuition costs. After 3 more collegiate seasons, a 7 inch growth spurt, and consensus All-NAIA player honors, Pippen was drafted with the 5th overall pick in the 1987 NBA draft to the Seattle Supersonics (who subsequently traded him to the Chicago Bulls). The scouting report on him read as follows:

Not necessarily the sexiest of scouting reports for someone who would eventually become one of the top 50 players in league history. While Pippen built his legacy on defense, he was also an apt offensive player, becoming the archetype for the point forward position. During his prime (1989-1999), Pippen had per game averages of 19.1 points, 7.1 rebounds, 5.9 assists, 2.2 steals, and 0.9 blocks. Not necessarily the offensive prowess that Larry Bird possessed, but with a stat line like that, Pippen should have been heralded as his generation’s defensive Larry Bird. Instead, he was teamed up with arguably the greatest player of any generation in Michael Jordan. There usually isn’t a lot of spotlight left when you are playing with the greatest. Ask 100 people who the lead singer of Aerosmith is, and most will answer Steven Tyler. Ask them who the drummer is, and not many will know the answer. 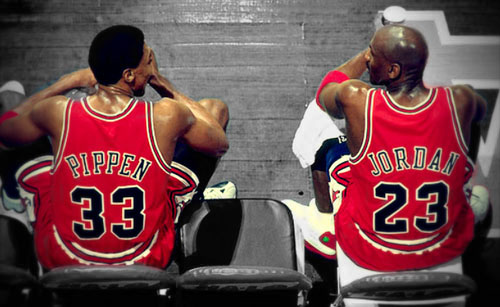 Pippen’s play on the court should have spurred him to more shoe deals, more advertisement contracts, and more widespread popularity. And yet, when his career was all said and done, you couldn’t help but wonder whether Pippen got everything that was owed to him. There were the stories of how Pippen felt he wasn’t getting paid what he deserved (which he wasn’t). There were the rumors that he felt slighted being outside of the limelight, when he provided so much to the team. While he did have his own shoe line (the PIPs) from Nike, they only lasted about two series. So, needless to say, not many companies bought into Scottie Pippen.

It wasn’t Jordan’s fault, though. Most of the blame lies squarely on Pippen. He didn’t have the same tact with the media that Jordan did. He was dismissive and defensive at times with reporters. Then there were the crunch time situations. Those critical times in games that live in lore and become mythologized. It’s not that Pippen didn’t perform well during those times. On the contrary, he performed great during crunch time. But he’s instead remembered for the times he quit on his team in the most critical of moments. There was the time he sat out Game 7 of the 1990 Eastern Conference Finals against the Detroit Pistons with a migraine headache. The Bulls eventually lost that game. Probably the most damning, though, was the one where he sat out the final 1.8 seconds of Game 3 of the 1994 Eastern Conference Semifinals against the New York Knicks because Phil Jackson drew up a play for Toni Kukoc to take the final shot, instead of Pippen. To make matters worse, Kukoc actually hit the game winner. This one was the most damaging because it came at a time when the Bulls were his team due to Jordan’s hiatus into baseball. When you are known to quit on your team during crucial periods, your popularity takes a big hit.

Which brings us to the best sidekick of this generation, Oklahoma City Thunder guard Russell Westbrook. Like Pippen, Westbrook was not highly decorated coming out of college. Like Pippen, Westbrook was drafted by a team that already had a young star in Kevin Durant. Like Pippen, Westbrook is seen as not being very media friendly. Coincidentally, Durant, much like Jordan, is viewed as a media favorite. And, while not by his own doing, Russell was also involved in a critical game snafu, when Thunder coach Scott Brooks sat an ineffective Westbrook for the entire 4th quarter of Game 2 of the 2011 Western Conferences Finals.

But, not everything is negative when it comes to Pippen and Westbrook. Both of these players are insanely loyal to their teams and teammates. Pippen had a couple opportunities to seek greener pastures during the championship run, but decided to sign for less to stay with the Bulls. Westbrook could have done the same last season, but decided to sign for the allowable max. Both players are highly competitive, with possible chips on their shoulders from being labeled second bananas. Both players are very team oriented, as evidenced by them sacrificing a little of their own games to coexist with two great players. The good severely outweighs the bad when it comes to Westbrook and Pippen, but the bad usually has more advertising power.

Which is why I found the signing of Westbrook to Jordan brand to be a bit ironic. Not ironic in the sense that he doesn’t deserve it. But ironic in the sense that a move like this will probably propel Westbrook into superstar territory, as far as media exposure goes. Into a territory that Scottie Pippen unfortunately never reached. With an endorsement team that includes Carmelo Anthony, Derek Jeter, Chris Paul, and Michael Jordan, himself, Russell Westbrook will have plenty of opportunity to expand his brand. He already has a slogan in place (WhyNot?), and already has a following outside of basketball because of his unique fashion sense. In a way, Jordan is helping this generation’s top sidekick become what his sidekick should have become.

1 thought on “Westbrook and The Boost”