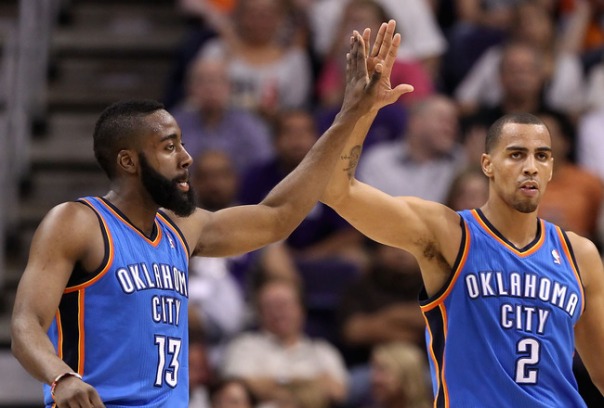 In late February of last season, when the Oklahoma City Thunder first acquired Kendrick Perkins, one of the biggest changes occurred on the offensive end of the floor. The lanes that were once open with the spacing provided by the perimeter games of Nenad Krstic and Jeff Green were no longer there. In its place, those lanes were replaced by “box and 1” defenses with defenders hedging off of Perkins and Thabo Sefolosha.

Mainly used for his defense, Sefolosha’s inability to consistently hit jumpers limited the first team’s offensive production. The opposing shooting guard, usually one of the better ball hawks on the floor, was able to play off of Sefolosha and help defend throughout the floor, whether it was doubling down on Kevin Durant or Russell Westbrook, or plugging up an open lane in the interior. In addition, the team replaced one of the better shooting centers in the league with one of the more offensively-challenged centers in the league. Perkins does all of his work in the interior. While he may step out and try a 15 footer from time to time, his best play is no more than 5 feet from the basket. Krstic’s biggest offensive impact wasn’t necessarily his shooting; instead, it was in keeping the opposing center away from the basket. Also, Serge Ibaka’s midrange game had yet to develop any type of consistency. In essence, the team seemed like it was playing 2 on 5 on the offensive end with this line-up most of the time.

This had the biggest effect on the play of point guard Russell Westbrook, whose game is predicated on using those lanes to drive to the basket. Westbrook’s stat line for the regular season remained consistent at 22 ppg on 44% FG shooting to along with 8.2 assists. But when the game slowed down as it usually does in the playoffs, his scoring increased to 23.8 ppg, but it was on 39% FG shooting to go along with 6.2 assists and 4.6 turnovers per game. Westbrook became less efficient in the playoffs and the offense, as a whole, became less efficient because of this. It was during these playoffs that the glaring need for a spacer became very evident.

Once the season ended, the consensus was that the next step in the evolution of this team was to replace Sefolosha with 6th man James Harden in the starting 5. Harden was a much better shooter and creator than Sefolosha, which would’ve added another dimension to the starting 5. No longer would the wing defender be able to help by hedging off of Sefolosha, as Harden’s ability to consistently hit 3’s would negate this. This would’ve opened at least one extra lane for Durant and Westbrook to drive through. Add this to Ibaka’s improving midrange game, and this should have brought the offense back to where it was pre-trade, with good spacing and perimeter options. Seemed simple enough.

But the devil’s advocate to this move has always been to ask where the bench scoring was going to come from once Harden was lifted off the bench. Every great team has at least one player from the bench that is able to take over when the bench unit is in there. The Mavs had Jason Terry and JJ Barea. The Lakers had Lamar Odom and Shannon Brown. The Spurs had Manu Ginobili. The Bulls had BJ Armstrong (first 3-peat) and Toni Kukoc (second 3-peat). And who could forget the Bad Boy Pistons and Vinnie “The Microwave” Johnson. Due to the Thunder’s great durability and good luck, we’ve never had to see what the second unit would look like without James Harden for an extended period of time.

The Thunder’s bench unit has been a well-oiled machine for the past 2 seasons. With point guard Eric Maynor running the show, Harden doing the scoring, Daequan Cook providing spacing, and forward Nick Collison providing the muscle, the Thunder bench has been one of the most efficient in the league during that time. This season, the bench averaged 39 points per game in the first 5 games, with Harden doing the most damage at 16 ppg. Where the starting line-up falters, the bench usually picks up.

Then the last two games happened. With Sefolosha dealing with a sore foot and flu-like symptoms and Cook also dealing with flu-like symptoms, the Thunder’s usual 10 man rotation was shortened to 8, with rookie Reggie Jackson and second year player Lazar Hayward filling in the missing pieces. With Harden in the starting line-up for the second half of the Dallas Mavericks game and starting outright in the Portland Trailblazers game, Thunder fans got a glimpse of what life would be like with Harden in the starting lineup.

In the second half of the Mavericks game, the trio of Durant, Harden, and Westbrook scored a combined 31 points with 3 assists while trying to come back from a second half deficit. The rest of the team scored 9 points in the second half with only 5 coming from one bench player (Maynor). In thePortlandgame, the trio combined for 64 points and 16 assists, but struggled from the field, shooting only 40% from the floor combined. The bench, on the hand, had only 14 points on 6/17 shooting.

While the trio figure themselves out, the bench is left to fend for itself without a valid scorer on tap. This is where an acquisition like Jamal Crawford, Vince Carter, or Tracy McGrady could’ve come in handy. While I like what I see from the future starting line-up, I also think the team is incomplete without a scorer off the bench. Which leads me to the weirdest thing I’ve said this young year: Damn, I miss Thabo Sefolosha.