Kevin Pelton (ESPN) on how big the fallout could be from Andre Roberson’s injury: “A number of statistics point to Roberson’s value at the defensive end of the court. According to NBA Advanced Metrics, the Thunder have allowed 11.8 more points per 100 possessions this season with Roberson on the bench. And when Roberson missed 10 games earlier this season, mostly with tendinitis in the patellar tendon he injured Saturday, Oklahoma City’s defense wasn’t the same. The Thunder allowed opponents to score 2.8 percent more efficiently than their usual offensive rating in those 10 games, as compared to holding them 3.2 percent below their typical efficiency with Roberson.”

Des Bieler (Washington Post) with a recap of the Thunder/Wizards game: “Later in the game, OKC’s Paul George made a valiant attempt to exact revenge on Westbrook’s behalf — “I was trying to finish that one,” he said after the game — by throwing down a titanic jam. George failed, but he earned a trip to the free throw line and, one would imagine, his teammate’s gratitude.” END_OF_DOCUMENT_TOKEN_TO_BE_REPLACED 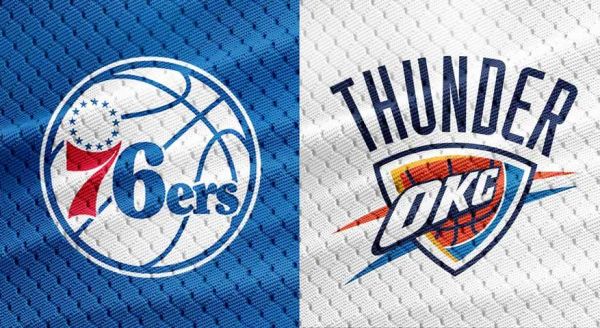 With their minds on their fallen comrade and playing their third game in four nights, the Oklahoma City Thunder took to the court on Sunday with heavy legs and heavier hearts. If their previous meeting with the Philadelphia 76ers was any indicator, the Thunder knew this would be a 48 minute (or 63 minute) kind of game.

A lot of the first quarter was focused on the interactions between Joel Embiid and Russell Westbrook, who had a little bit of a spat at the end of their first meeting in Philadelphia earlier this season. It didn’t disappoint early on as Embiid had a clean drive to the basket after losing Steven Adams on the perimeter and had only Westbrook in between himself and the basket. Westbrook tried to take a charge, but Embiid went up and created a poster. The rest of the first quarter was back and forth affair with the Thunder taking a two point lead heading into the second. Paul George paced the Thunder in the first frame with 13 points on 4/8 shooting from the field. END_OF_DOCUMENT_TOKEN_TO_BE_REPLACED