They say a picture is worth a thousand words. Do you know what the above picture says? It says, just like the looks on their faces, “Can we please get this sh!t started?”

On Wednesday, August 12th, the NBA (finally!) released their schedule for the upcoming season. The Oklahoma City Thunder found themselves with 24 primetime games, second only to the Cleveland Cavaliers and Golden State Warriors, who each have 25 primetime games. The primetime games include any games on TNT, ABC, or ESPN. In addition, they also have 9 games scheduled to be aired on NBATV. Being a nationally popular team can be a gift and a curse. All that attention usually means the team is predicted to do well in that particular season. But it can also be taxing on the players who have to play a schedule with slight variations that makes it a bit more difficult. Every team plays 82 games, with the same basic format depending on what conference they play in. But not every team has to face a top notch opponent once or twice a week for the entirety of the season. The schedule makers normally don’t have to worry about where to slot the Charlotte Hornets or the Portland Trailblazers because those teams don’t move the needle like the the aforementioned Thunder, Cavaliers, and Warriors do. But for certain teams, the schedule makers have to plug in their primetime games first and then go on from there.

The first thing I noticed when I saw the schedule was the imbalance in road games from the first half of the season to the second half of the season. In the first 41 games, the Thunder play 16 road games. In the final 41 games, they play 25 road games. While some may look at this as a detriment, I see it as a benefit. A home-heavy schedule in the beginning of the season allows for more practice time, which, for a team that was never fully complete due to injuries last season, will be extremely beneficial. Many don’t realize that Kevin Durant never got to play with Enes Kanter, DJ Augustin, and Kyle Singler. By the time the Thunder traded for these players, Kevin Durant was in the beginning stages of being shut down for the season. By the time the second half of the season rolls around this year, the Thunder should be firing on all cylinders. 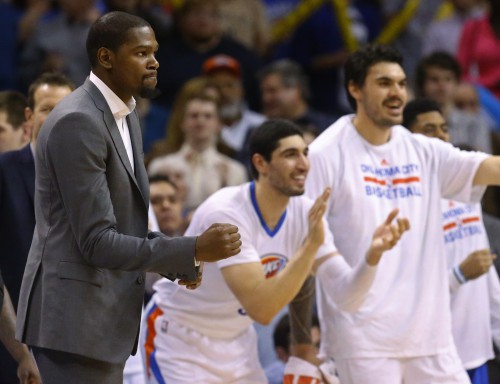 There’s an even greater imbalance after the All-Star break. In the 28 games post All-Star break, the Thunder will play 17 of those away from the Chesapeake Energy Arena. It’ll be imperative that the Thunder build up enough currency in terms of wins and losses before the All-Star break to help supplant the road-heavy schedule at the end of the season.

NBA commissioner Adam Silver has made it a priority to provide players with more rest during the season by extending the All-Star break, limiting the amounts of back to backs and 4 games in 5 days. Due to their geography, teams that are in the middle part of the country don’t have to embark on long road trips, which limits the amount of back to backs. The Thunder only have 15 back to backs this season, compared to the league average of 17.8. In addition, the Thunder, like most teams in the league, only have one 4 games in 5 nights stretch, and it happens in the first week of the season (Nov. 1 – Nov. 5).

But that in-season resting may be a mirage. Due to the fact the Thunder are centrally located, it allows them to travel more often without racking up as many miles. The Thunder alternate between home and road in the first 8 games of the season, and don’t have their first multiple game road trip until December 21st. With so much travel, that feeling of rest may seem like a farce.

The toughest stretch for the Thunder will be a 15 game gamut from February 6th to March 12th that will see them face the world champion Warriors three times, the Los Angeles Clippers and New Orleans Pelicans twice, and once against the San Antonio Spurs. Nine of those games will be on the road, including a stretch of 6 out of 7, with the Warriors being the home game in between. Its a stretch where finishing 8-7 will put a smile on your face.

Oct. 28 – vs. San Antonio – First game of the season. Against the Thunder’s biggest rival/big brother. With (hopefully) a complete and healthy roster. Not enough has been written about how Durant looked in Las Vegas last week. While he didn’t participate in any 5 on 5 contact drills, he did participate in every other drill. And he looked like Kevin Durant. Which is great news.

Nov. 18 – vs. New Orleans – Welcome back, Kendrick Perkins. Say what you want about Perkins, but his voice is still resonates in the locker room. Although they understood the move, many on the team were not entirely thrilled that Perkins was traded. He was like the wise sage on the team, if a wise sage cursed and spoke with a southern drawl. In reality though, this game is more about seeing how Anthony Davis continues to develop. He knocked on the doorstep of greatness last season, and will likely kick down that door this season. If the Pelicans can continue to pick up pieces here and there, they may be a team to contend with in the future.

Nov. 27 – vs. Detroit – Good riddance, Reggie Jackson. If the previous game on this list was to welcome back an old friend, this game is to jeer what became a malcontent at the end of his run with the Thunder. Reggie Jackson could have stayed a Thunder. He could have taken the 4 year/$48 million dollar contract they offered him before his 4th season and been one of the top 6th men in the league. Instead, knowing he was good enough to be a starting point guard in the league, he decided to pout his way through the first 50 games of the season, when the Thunder were needing every able body they had on deck due to their plethora of injuries. It wasn’t that he wanted out, because I agreed that he had the talent to be a starter in the league, and it showed in the extension Detroit gave him (5 yrs/$80 million, ironically, the same exact extension James Harden received when he was traded). But it was in the manner that he conducted himself to meet that end. Because of that, he will likely face at lot of this in his first return to the ‘Peake:

It may reach Patrick Beverly-like levels before its all said and done.

Dec. 25 – vs. Chicago – Derrick Rose and Russell Westbrook have not gone against each other in a regular season game since December 6th, 2010. Let that sink in for a minute. The two most athletically gifted specimens the point guard position has arguably ever seen have not faced each other in five full years!? The Christmas wish of a lot of NBA fans is that these two make it to this game in one piece and finally give us the show that has been five years in the making.

Feb. 21 – vs. Cleveland – Durant vs. LeBron. Westbrook vs. Irving. A possible Finals preview? Last season we were robbed of seeing these two teams at full strength in their two match-ups. LeBron James sat out the meeting in Oklahoma City, while Durant sat out the game in Cleveland with his injuries. Hopefully, the injury bugs turns away from these two games.

Feb. 27 – vs. Golden State – In the one game Oklahoma City was fully healthy against the Warriors, they beat them pretty convincingly. It always goes back to “what if?” when it comes to last season. In another meeting last season, Durant put on a show for the Oracle faithful, scoring 30 points in the first half before succumbing to a sprained ankle at the half.

Apr. 11 – vs. Los Angeles Lakers – Possibly the last time to see Kobe Bryant in a Lakers uniform. I’ve always said that the Spurs are who we modeled ourselves after, but the Lakers are who we wanted to beat. A lot of that has to do with the respect Durant and Westbrook have for Bryant, which he has verbally reciprocated time and time again.

Another great season is ahead for NBA fans. The league has once again tabbed the Thunder in their upper echelon of teams. With that said, I only have one question: Is it October, yet?