Overall, the Oklahoma City Thunder have had a pretty successful offseason. They signed a proven sharp-shooter in Anthony Morrow. Their draft yielded a possible rotation player in Mitch McGary. Kevin Durant and Russell Westbrook decided not to participate in the FIBA World Cup, which means they’ll be rested heading into the season. Serge Ibaka and his calf look good playing for Spain in the World Cup. And their young players all played reasonably well in Summer League.

One of the goals heading into this offseason was to sign Reggie Jackson to a contract extension. This past season was Jackson’s third in the league, which means the Thunder were the only team allowed to negotiate an extension for Jackson. If the Thunder and Jackson don’t come to an agreement by October 31st, then Jackson will head into restricted free agency next offseason. In restricted free agency, any team can offer the restricted free agent a contract. If the player signs the tender, then the retaining team has three days to match the offer. If the offer is unmatched, then the player moves on to the team that offered him the contract.

It’s a scenario that is currently being played with three prominent young players: Chandler Parsons, Eric Bledsoe, and Greg Monroe. Parson’s got a max contract from Dallas that his previous team, Houston, decided not match. Bledsoe and Monroe are currently embroiled in contract negotiations that may lead them to just play out this season on one-year tenders and then enter unrestricted free agency next offseason. The issue with restricted free agency is that if teams don’t offer the player a contract he feels he deserves, then the upper hand goes to the team the player is currently on. Monroe and Bledsoe both believe they deserve max or near max money, but most of the available money this offseason has dried up. The teams that do have cap space don’t want to blow it on players that are still unproven and probably not worthy of a max contract. How these negotiations play out will probably have a huge bearing on how future contract negotiations for Jackson will play out. 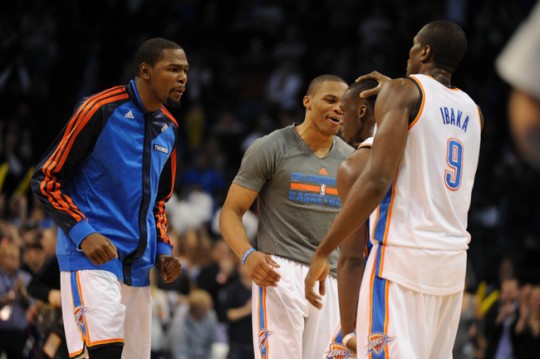 If Jackson doesn’t sign this offseason, then the 2014-15 season basically becomes a contract year for him. For a championship contending team like the Thunder, a contract year for one their main players can be both a blessing and a curse. We saw last season how a contract year to a main player can implode a team (Indiana and Lance Stephenson). For a player like Jackson, all the hard work in their first 3 seasons is aimed at getting that first big contract extension. Going from a mindset of “I’m going to take these next few seasons to acclimate myself to the NBA and get better”  to “this is the season that’ll determine how much I get paid for the next 4-5 seasons,” can severely affect the chemistry of the team for that season.

Jackson has stated how he wants to be a starting point guard in the league. Be that with the Thunder or with someone else, he voiced his desire during his exit interview at the end of the season. Jackson has had to fill in for the injured Russell Westbrook on many occasions last season and for most of the playoff run two seasons ago. With Thabo Sefolosha’s departure, the starting shooting guard position is up for grabs on the Thunder. While Jackson started the last four games of the Western Conference Finals as the 2-guard, the Thunder will probably want to start a more defensive-minded perimeter defender this upcoming season. That player will probably be Andre Roberson. But if the Thunder liked what they saw last postseason, and like what they see in the preseason, maybe Jackson has a shot at being the starting 2-guard for the Thunder.

The “Jackson as a starter” narrative takes a bit of a hit if the Thunder don’t have a prominent scorer/creator off the bench. Jeremy Lamb, Steven Adams, Anthony Morrow, and Perry Jones all have offensive ability, but struggle with creating their own shots. They are at their best when someone else is setting them up. That someone will likely be Jackson.

A contract year may be good for the Thunder, though. Contract years are known for two things: disrupted locker room chemistry and statistical anomalies. If Jackson is able to play an entire season at career high levels, he may the final piece the Thunder are missing as a championship team. The flip side to that is that Jackson may push himself out of the Thunder’s price range if he has a career year. 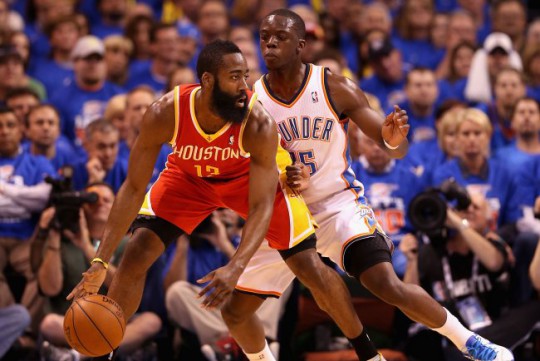 Whatever happens, the Thunder will go into this season with Jackson on the roster. This is not another James Harden situation. Jackson is the Thunder’s 6th man and one of the better combo guards in the league. His 3-point shooting is improving and he has shown to have ice water in his veins in pressure-packed situation. With that said, he is not James Harden. Even as a 6th man, Harden was viewed as the best young 2-guard in the league. Two seasons after the trade, that prognostication still holds true (even if he doesn’t play defense). Jackson, at this point in his career, is in the lower second or top third tier of point guards. Does he have the ability to move up on that list? Of course. But the league got the memo about a decade ago that good point guard play is tantamount to the success of your team. Since then, most teams have sown up their point guard positions. With Rajon Rondo and Eric Bledsoe likely to hit the market next offseason, Jackson may be 3rd on the point guard free agency list.

Compared to two seasons ago, the Thunder are in a much better place financially with plenty of cap flexibility. They have eschewed the luxury tax the entire time they’ve been in Oklahoma City, which means they don’t have to worry about the repeater tax. And Kendrick Perkins and his albatrossian contract comes off the books after next season. If Jackson’s situation mirrors that of Bledsoe’s this season, he may be more inclined to take the guaranteed money from the Thunder than to test his luck in restricted free agency.

There are still plenty of variables that need to play out between now and next offseason. Injuries, chemistry issues, and the performance of other comparable players have a way of influencing the marketability of a player. The Thunder are now much better suited to deal with this situation than they were to deal with the Harden situation two seasons ago. They may still eventually trade Jackson, but they’ll probably try to hold on to him as long as possible before visiting that option. Another factor that may influence the contract negotiations is the development of Semaj Christon. If Christon shows any ability to perform in the NBA, the Thunder may be more inclined to trade Jackson for assets and roll the dice with Christon. While the situation may draw comparisons to two years ago, the Thunder will probably fight as hard as possible to keep Jackson. It’ll be up to Jackson whether he wants to stay in Oklahoma City or not.